Sean and I visited Liliana last night and she was wide awake when we arrived. I was really happy to see her looking around actively instead of the eye fluttering and rolling that we usually see when she’s tired.

The nurse told us that she’s taking 30 ml now and that while they’re still feeding her with the tube, they have someone — a specialist, I suppose — who comes in and tries to treat Liliana’s oral aversion by using the pacifier. Also, instead of using gravity to get my milk into Liliana’s stomach, they’re using an automated pump that pushes it through at a slower rate because the gravity method they were using before was giving it to her at a rate too fast for her stomach.

Liliana’s umbilical cord IV came out and the pickline was put in her leg. She also had an IV in her hand, possibly for pain meds, which should have been taken out today. Since she no longer has an IV in her belly, they unhooked her from the warmer bed and she’s now able to wear clothes. Sean wanted me to go to the hospital today and dress Liliana up, but I decided it would be better to organize and clean the house a bit in anticipation of Liliana’s discharge. Sean very much wants her to come home this weekend and while I still think that it may be a bit more than that until we can have Liliana at home with us, I might as well prepare. Just in case.

So I vacuumed and put away things that were lying around. Moved this there, moved that here. Did a little bit of cleaning in mommy and daddy’s room too. I took a short nap, after which I felt miserable and still tired, and then took some pictures of Liliana’s room.

The wall decals had come in a few weeks ago and it was fun putting them up. Sean placed the floor lamp in between the crib and the changing table. There are stuffed animals in the crib, but they’ll be coming out once Liliana’s going to sleep in there. SIDS and all that. 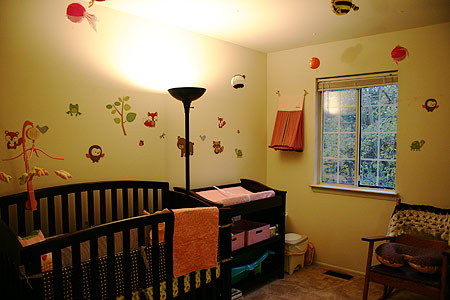 Here is a picture of the other side of the room! Sean originally had the diaper cakes from my baby shower on the bottom shelf of the changing table. Since the baby tub has been sitting on our couch for 2 weeks, I decided to put the tub where the diaper cakes were and move the cakes on top of the bookshelves. I know that diaper cakes were made to be disassembled but they are so cute!

Next to the shelves is a side table and lamp that Sean and I (gasp!) compulsively bought at Target. It was all my fault. Next to that is a 2-seat ottoman Sean bought on sale from Newegg. It’s pretty comfy and you can turn the seat top over to become a tray. Inside are 2 individual ottomans so you can make a little ottoman village. 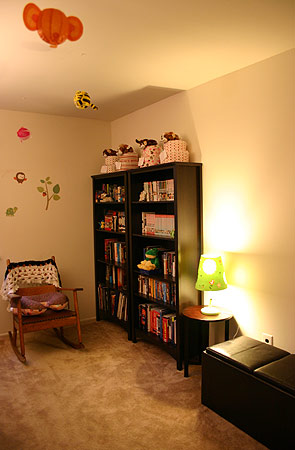 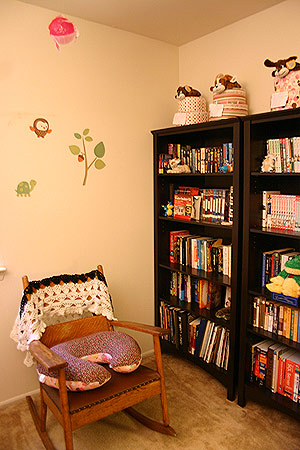 A closer look into this corner

Here’s a closer look at the lamp from Target! When we were shopping we were looking at the regular table lamps and were turned off by all of them because they were either boring or too expensive for what we needed it for. I glanced across to the next aisle across the way and there I saw children’s lamps. We went over and I fell in love with this lamp and a matching owl pillow. 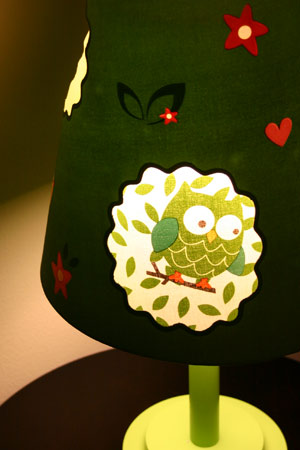 Look how cute that lamp pull is! 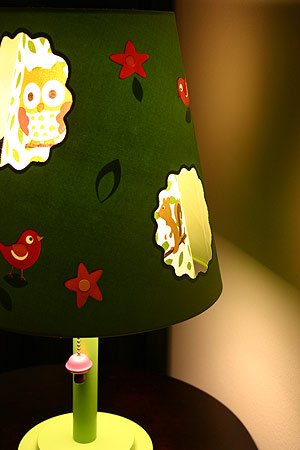 The last lamp photo, I swear. 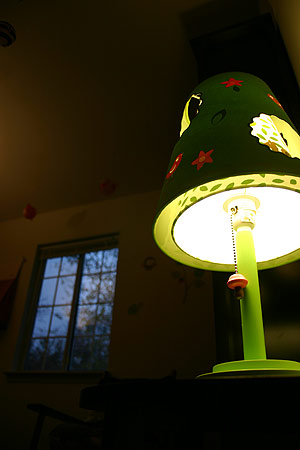 A more interesting angle, just because I can

Here’s the bulldog that I mentioned in this post. 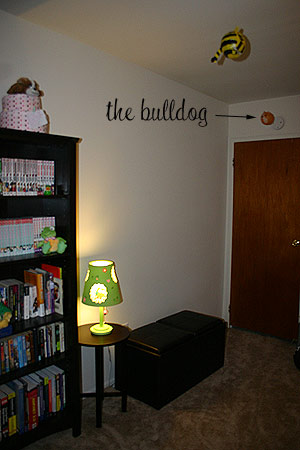 The bulldog guarding the door

We’re all set for Liliana to come home!