Liliana and I headed down to CHOP today for her follow-up with the surgeon who performed the CDH-correcting procedure. The incisions are healing fine and our only concerns now are Liliana’s reflux and poor feeding skills.

For the reflux they’ve increased the dose of Zantac to 1 ml every 12 hours and gave me an extra prescription if I run out. Since Liliana has been gaining an average of 20 grams each day they don’t consider the reflux to be too damaging to her health.

Liliana’s feeding skills are so poor because she’s so inconsistent. One second she’ll reject the bottle’s nipple and then the next she’ll start sucking like it was all she wanted in the first place. Tonight when I tried feeding her, her tongue kept pushing the bottle nipple left to right but at the end always away from her mouth. She was still opening her mouth wide open in anticipation of something to suck, so I popped in the pacifier. She started sucking on that happily, so once she got the sucking motion going on for a good while, Sean took out the pacifier and I popped the bottle nipple in. Liliana still had the memory of sucking in her mind and she was able to drink (I’m guessing) 40-50 ml. It’s probably the most we’ve been able to get into her orally this whole week.

To end this post, here’s a picture of Liliana during her tummy time yesterday. That’s dried milk on the corner of her mouth. Her eyes get so big sometimes and her eyelashes are getting so long that she must have Daddy’s eyelashes. Her eyes are still gray and so captivating, I wish her eyes would stay that color. 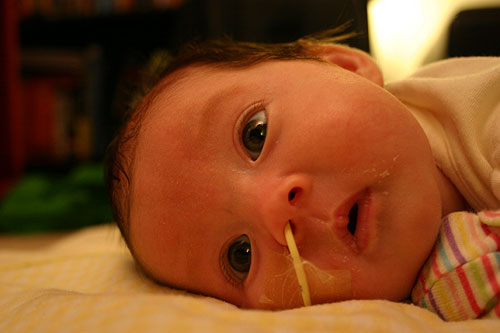