Here I am, getting ever closer to the end of this pregnancy, and I have decided once and for all to start this blog about my as-of-yet unborn child. Her name is Liliana and she is diagnosed with CDH, or Congenital Diaphragmatic Hernia. This means that she has a hole in her diaphragm and because of this hole, some of her organs aren’t where they should be. The type of CDH that Liliana has is on her left side and is more common and less severe than right side CDHs.

With this hole on the left, her stomach and some of her intestines have moved into her chest cavity, limiting the space in which her left lung should be growing. This also shifts her heart closer to her right side. Basically what all of this means is that her lungs will be underdeveloped when she is born and she will require special care to help her breathe. She will also have to undergo surgery once she is stable so that she can have her organs in the correct places.

My husband Sean and I conceived Liliana shortly after I had a spontaneous miscarriage in February 2009. My first pregnancy was unexpected but welcomed. As we were living in a one-bedroom apartment, we began to look for another place to start our family in. It was a happy time until I started bleeding.

My doctor had me do blood work to see what was going on, to see what the count was for that pregnancy hormone. The results from the second blood sample were lower than the first. I was miscarrying. I cried when I got the results. I cried when I drove home that day. I cried even harder when I got home and crawled into my sheets on the bed. Somehow, even though it seems so long ago, I can still cry about it.

We moved into a two-bedroom apartment in March and after a missed period, found that we were pregnant once again. We feared another miscarriage, so we waited for the pregnancy to progress well.

Sean and I went together to the first ultrasound at 15 weeks so that we could date the pregnancy, as my last period was the miscarriage.  We were happy to see the baby, as blobby as it was, but the sonographer said that something was wrong and that she thought it a good idea for us to return in the afternoon so a doctor could take a look. She said the stomach, which is the black spot in the abdomen, was higher than it should be. 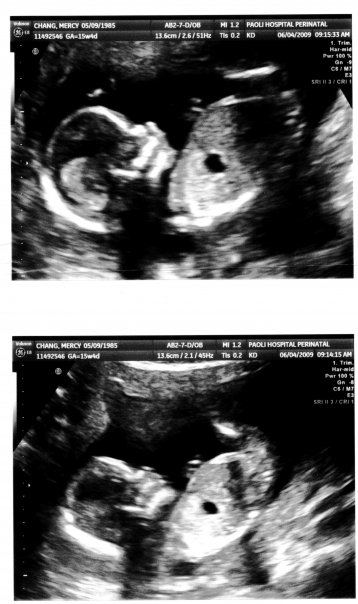 So we came back later that day and the doctor performed another ultrasound. When he was done, we were seated in his office, not knowing exactly what was wrong. He diagnosed our baby with CDH and explained the severity of it, of how there is a great possibility of other problems with the baby, such as chromosomal abnormalities or heart conditions. The only good news we got out of this session was that the doctors at Children’s Hospital of Philadelphia (CHOP) have had a lot of experience with this condition and know how to treat it.

All of it was still overwhelming.

When Sean and I got home that day, it was not pretty. We were filled with self-doubt as to how viable our genetic material was compared to people whom we considered unfit to breed. We’re both young and healthy, coming from two different ethnicities. Why is this going wrong?

After an amniocentesis, we found that there were no genetic anomalies and that our baby would be a girl. The development of the CDH must have been a fluke because there didn’t seem to be anything else wrong with her.

Eventually, we got in contact with CHOP and had a consultation. We spent the day there, meeting with several people and doing MRI & ultrasound tests. At the end of the day, we sat in a room with several doctors. They told us about how the treatment for CDH would be done.  If the baby is stable on a ventilator, they would do the surgery and wean her off of the ventilator. If she is unstable or develops pulmonary hypertension, they would have to put her on ECMO, a process that would take her blood, oxygenate it for her, and pump it back in. The longest they can have a patient on ECMO is 2 weeks, at which they would perform the surgery.

The doctors told us about problems that can occur after birth, one of them being a 25% chance of neurological problems, namely cerebral palsy. Another is gastrointestinal — there are possibilities of an oral aversion and/or reflux. She may also develop asthma.

The good news was that they believe my baby has a good chance at survival due to several factors. One, the liver being down. If the liver were also up in the chest, that complicates things and greatly affects survival rate. Two, the LHR or lung to head ratio. They consider anything above 1.0 to be good and she had an LHR of 1.06. Three, the fact that she had no other abnormalities present.

So while this whole thing has been difficult, Liliana is still growing in my belly at 34 weeks. This past Tuesday, she weighed about 5 pounds and is doing great. She’s practicing her breathing (which makes her get the hiccups every now and then) and is moving around a lot.

Once Liliana is born, she will most likely be in the hospital for around 2 months. Then when she is ready to come home, her mommy and daddy will be waiting with big smiles, open arms, and so much love to give her.