While Liliana’s breathing is not a problem anymore, something else is delaying her discharge from the hospital — her digesting. They had to put a tube down into her stomach to help with her feeding. If she doesn’t drink my milk from the bottle they give her, they put it through the tube. Also, before each feeding they attach a syringe and suck out any residuals from her stomach to see how much of the milk has not been digested yet.

For some reason, Liliana digests easier when the milk is given to her via tube. For example, the nurse yesterday checked Liliana’s stomach for any residuals and found none. Later on after a bottle feeding that Liliana had taken completely, she had an amazing amount of residual in her stomach. I don’t remember the exact numbers but it was as if Liliana had digested only 3 ml of a 15 ml feeding over the course of 3 hours. 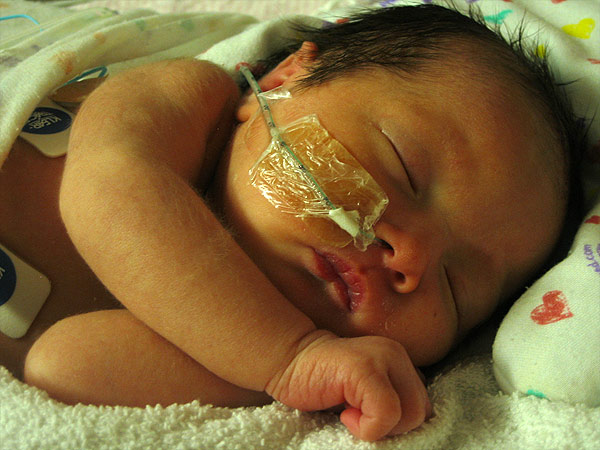 A sleeping Liliana with a tube that goes into her stomach

Today, Sean and I spoke to one of the nurse practitioners about Liliana and her status there. The nurse practitioner said that they won’t consider discharging her until she is able to keep down 2 ounces of milk at each feeding and also gain some weight. As of now, she’s taking 20 ml at a feeding and the nurses are supposed to increase that by 5 ml a day. If we take into account that 1 oz = 29.57 ml, it will take at least 8 days for discharge if everything progresses smoothly. Although Liliana did great with weaning off the ventilator, I don’t think this will be as easy. My estimate would be 2-3 weeks.

The NP also talked about the IV in Liliana’s belly. They put an IV through her umbilical cord right after she was born and Liliana is still getting nutrition through this IV. The NP told us that really, that particular IV is kept in for about a week and now it’s been a week and a half. She told us about a longer lasting IV called a pickline. Either a neonatologist or a nurse from the hospital’s special IV team will insert it into a vein in the arm or the leg, and it will be a vein that threads into a larger vein. This particular IV is able to get higher concentrations of whatever they’re going to be putting in, which in this case would be nutrition. I think it was explained to us that Liliana needs the IV until she is able to take the 2 ounces. 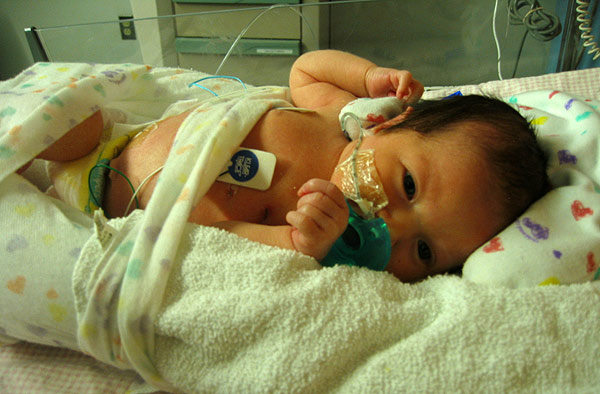 Liliana and her pacifier

The whole thing makes me worry because if it gets worse, they may need to medicate her for it. If things get really bad, they may have to operate for gastroesophageal reflux (GER). In any case, it makes me sad to see her gag and cough. Liliana has vomited a few times after her feedings from what I hear and I can only hope that her body starts learning how to digest properly.

Apart from that, Liliana is doing well. She’s sleeping a lot and when she is awake, she is only fussy every now and then. She does get upset sometimes and cries, but she is relatively easy to calm down. Sometimes when she’s really sleepy, she freaks Sean out by rolling her eyes up into her eyelids. I’m hoping that’s normal.

All in all, things are OK for now.