It’s another Friday and another end to a long week.

Last Sunday we joined one of Sean’s high school friends and her family at Kerr Park. Two of her daughters, a 3-year-old and a 6-year-old, were very nice with Liliana. The 3-year-old was holding Liliana’s hand through the entire playground, and though Liliana had a few unfortunate events happen with the slide, she had a lot of fun.

Liliana had physical therapy on Tuesday. She did a few new exercises, and was practicing how to step up to reach something on the far edge of the couch. I told the PT that whenever Liliana went down a slide, she would fall back instead of staying seated down the slide, and so the PT showed me an exercise with “Row, Row, Row your Boat” that would help. It was just like an assisted sit-up for Liliana.

Thursday was occupational therapy. We tried some Pediasure, both in an open cup and with a regular adult-sized straw. I was surprised that Liliana was able to suck through a regular straw; with the open cup, Liliana just dipped her finger in the liquid and wouldn’t let us put the cup to her mouth. The OT thinks we should still try with the open cup, either in play or with something that isn’t as strong-smelling as Pediasure.

She also suggested getting Liliana involved with food preparation. I think we’ll be able to do some of that this upcoming week, especially with Thanksgiving just around the corner!

Damien is still walking short distances. He takes a series of small steps very assuredly, but sometimes he gets a little too excited to get somewhere or he can’t hold his balance anymore so he falls down and crawls the rest of the way.

He’s also learning a lot of different things. He sometimes tries to copy what you’re saying: last night I told him “done” and he repeated it back to me. That was the only word he said for the next ten minutes. During Liliana’s OT, we were making pretend sipping noises with the open cup, and he made the noise as well. He’s also learning how to give things. I’m still amazed that he blows Liliana’s whistle and he makes engine noises when playing with a toy car. He’s turning one year old in December.

Liliana learns very quickly. Yesterday, she was at a wall, counting, “3, 7, 8, 9, 10!” and I said, “Ready or not, here I come!” She counted a few more times, always ending it with her rendition of the Hide & Go Seek call. She also watched an episode of Little Bill where he was trying to tie his shoes. Today she grabbed one of my shoes, untied the laces, and tried tying the laces together, saying “Loop, loop.”

If only she could learn how to share and not push her brother as easily as she learns everything else! For the past few minutes, Damien has been playing with a pillow, and Liliana has been trying to take it away from him. 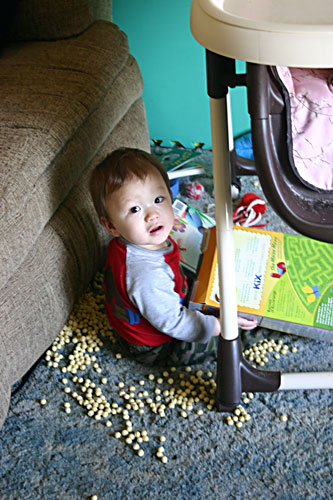 Damien was a troublemaker when I was doing dishes this past week. 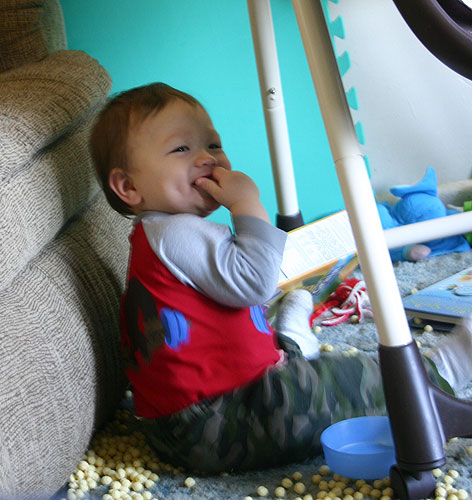 What does Damien do if there's food available? Of course, he eats it. 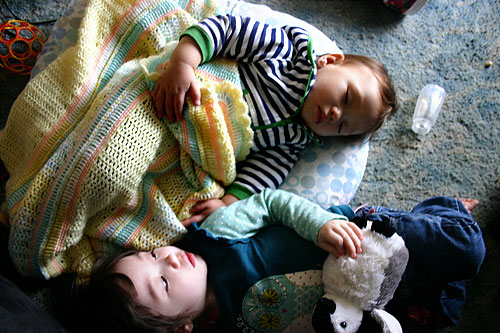 Damien taking his daytime nap. Liliana just "fell" next to him. 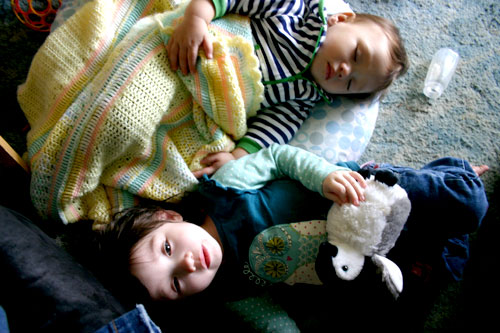 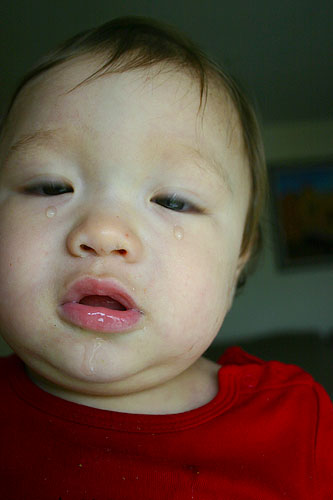 I have a lot of work to do. At least the kids are playing together right now without screaming. It’s not going to last.

Have a good weekend!