Liliana and I are at the hospital and we’re in the last half of the impedance testing. The testing itself has been easy-going. All they did was put a thin tube down into her esophagus in a procedure very similar to the insertion of her feeding tube, took an x-ray to verify the tube’s location, and adjusted the length by pushing it in one more centimeter. 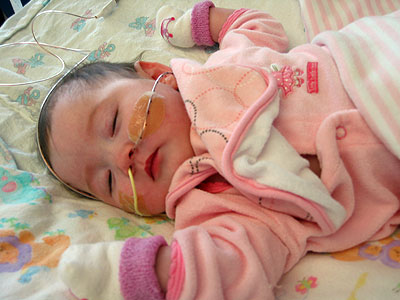 The tube is plugged into a little machine, about the size of a Gameboy Color or a PDA when they first came out. The machine records the pH levels in her esophagus, and also displays the time and Liliana’s name on its screen. Whenever Liliana coughs or throws up, I have to make a note of the displayed time and what happened on a sheet they gave me. Other things that need to be noted are her feedings (times they start and stop) as well as her medications.

When Liliana’s doctor told me about the tests he was ordering for her, he said that he’d have someone call us to schedule both of the tests. So, when I got the call last week to schedule Liliana’s impedance testing, I thought it covered both the pH probe and the gastric emptying test. This was not the case! It was just for the pH probe, and the scheduler did not mention the gastric emptying test at all.

We might be able to do the gastric emptying test if someone pulls some strings today. If not, I don’t mind because I want to go home. Even though our nurse was giving Liliana her night-time feedings so I wouldn’t have to, I did not sleep very well. Suffice to say, I am very much looking forward to my own bed.

It’s almost 12, and there’s only about an hour left of the test. I’m going to start putting away my things so that we’re ready to go when they discharge us from the hospital. Bye!