So we got back to Pennsylvania on the 18th after dropping my sister-in-law off at University of Florida (Go Gators?).  It was a tough ending to the trip.  We first drove to Lion Country Safari which was on the way to Gainesville.  It was very interesting and was probably my second favorite event while we were down there.  We got to see Rhinos, zebras, a few lions and a huge water buffalo walked right in front of the car.  Then we drove another 3 and a half hours to Gainesville to drop her off.  Dropped her off in her tiny empty dorm room and hit the road.

Only 15 hours to go, haha, and we were already exhausted.  You can probably guess how the trip went.  Most of the driving was done at night with a few stops.  Every stop involved both kids waking up and crying hysterically.  Damien also woke up for a long period of the night and just stared at whomever was sitting next to him.  Pair that with an inability to recline and we both had trouble sleeping.  I had taken vitamin B but my exhaustion was so complete and the road so boring that I could not stay awake.  Seems that most of our driving took place in Florida, as usual.

The sun came up the next day, and we continued driving, we were now in North Carolina, maybe, and just entering Virginia.  Liliana now decided to start gagging and we couldn’t stop every time she felt nauseous because we would never have gotten home.  We spent the next 7 exhausted hours trying to retain patience with her constant gagging and trying to stay awake enough to drive.

Next, at 1PM on the 18th, we reached Washington DC.  The GPS unit had traffic alerts and redirections around traffic enabled, so I thought it would alert us to heavy traffic.  Instead, it simply started routing us in strange directions. I turned off onto a high occupancy lane just in time to see all of Interstate 95 back up.  Next, the GPS routed us onto 395 straight into the heart of washington DC.  I said to Mercy, “Have you ever seen the Washington Monument?” and I pointed forward as we drove straight towards it.  The GPS decided that the fastest way home was to drive down Independence avenue and get on the Baltimore – Washington Parkway.  Luckily, it worked, but it sure did make me nervous.  Then, we drove past ING Direct (where I work, I waved to the Service Desk on my way by) and took the way home that I take home from work everyday while I argued with the GPS that it was faster than travelling up 202, or going straight down 1.

Then, as a welcome home present, I reached to grab Damien out of the car and came away with brown fingers, if you know what I mean. and that was just from trying to unbuckle him.  He had exploded, apparently.  But we made it home!

Here are a couple of my favorite moments: 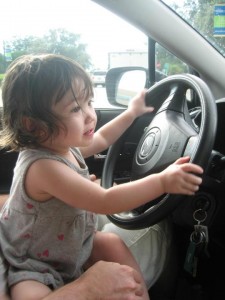 Liliana driving when we got too tired. (sarcasm) 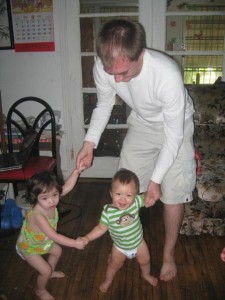 There's a party in my tummy! So yummy, so yummy!

For that second picture, I actually asked Liliana to hold his hand and then we all started dancing.  I didn’t think it would actually work but we actually were able to all stand and dance for about a minute.

So Liliana is going terrible two with everything.  Her response for everything is mine or no and nope.  She’s trying to go completely independent as kids at her age often do.  Problem is that it is also affecting her special care.

When she gags now and we try to vent her, she just struggles and says no.  As we are holding a tube connected to a “button” that is attached to a hole in her abdomen, trying to wiggle away from us is not acceptable or safe in any way.  At the same time, Damien will crawl over and try to grab things while we’re doing this.  Mercy is very worried about dealing with the kids without me around.

Liliana also now owns everything in the room.  Damien is not allowed to play with any toys unless she authorizes it.  Even if she does let him play with something by handing it to him, she then likes to exercise her power by then taking it away from him.  Despite reminders that this needs to be a gentle activity, tearing a comparatively large toy stroller away from him while shouting no is hardly gentle.  And, like I said, she’ll go and grab the stroller and put it right in front of him and start playing with it.  Then she’ll get upset when he starts playing with it.  It would be funny if the whole thing wasn’t dangerous, you enjoyed high pitched girls’ screeches, and discipline wasn’t your responsibility.  Sadly, for us parents, none of the above humorous requirements allow the situation to be humorous. 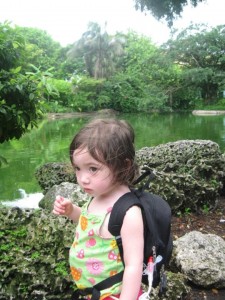 Here was Liliana at Jungle Island. The look, stance, and finger demonstrate that she was close to gagging when the picture was taken. 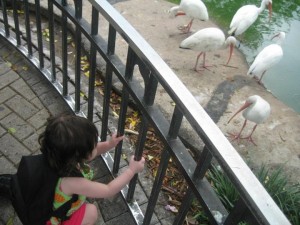 Here she was looking through a fence at a lake and lots of big fish (Koi)! 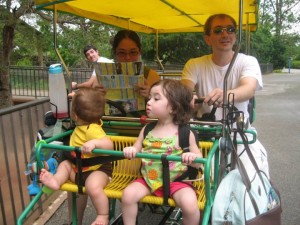 Next, we went to the Zoo. This was our four adult, two children bike. Christina went with us, she's behind the camera. 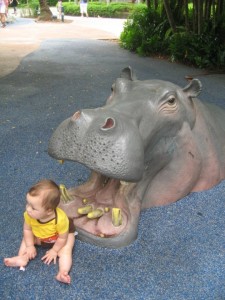 Damien got attacked by a hippo while we were there. 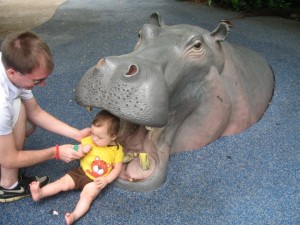 Daddy saved him though. Mommy and Daddy are very selfish with their baby back ribs.