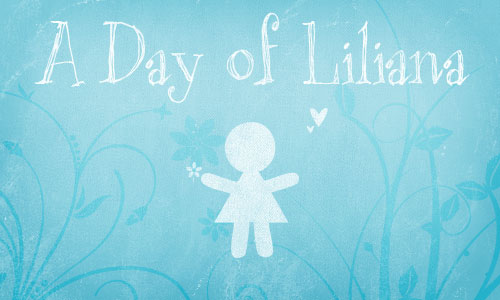 If Liliana could do what she wanted all day, she would play with bubbles. When Liliana would blow bubbles, she would get to hold the bottle of bubbles all she wanted, without an icky mom telling her that Mommy has to hold it.

The bubbles would last all day long, because Liliana doesn’t tire out from hopping and popping. Only then would she not have to scream and cry for more bubbles. Icky mom is mean for getting tired of blowing bubbles for Liliana.

If Liliana had her toothbrush, she would load it up with as much fluoride-free toothpaste as she wanted. Then she would brush her teeth all by herself, making sure to taste the toothpaste often. Mommy and Daddy wouldn’t brush her teeth, because they try to brush her molars and that hurts.

If Liliana were to go outside, she would run and jump on the grass.If there were any flowers, she would try picking them or at least try smelling them. She would play ball, even if it were cold outside.

She would be happy with all of her silliness. She would blow at the steam coming off of food. She would say, “Nose,” and then do an Eskimo kiss. She would growl and roar like a dinosaur on the hunt. She would spontaneously spin around, performing Ring Around the Rosie, even if she were only wearing a diaper because that’s all Mommy had gotten on a bathed Liliana before she started twirling.

It’s too bad though. Liliana can’t do only what she wants all day…

…but it doesn’t deter her from trying!

Mommy’s Note: I wanted to do something a little different from my bulleted lists and uninspired blah blah blah. Don’t worry though; I’ll have some of that later this Friday morning, along with some cute photos.

P.S. The site has been acting weird where my latest posts have been disappearing. This post was actually written Thursday night, long before I had published the Friday photos. I’m republishing it to make sure that it gets into the database correctly.