It’s Friday again, so of course I need to post about the week and include some pictures and all that good stuff but really, I’m tired. It’s midday, the point where I need a second cup of coffee just to function and yet I’ve hardly finished my first! But I must soldier through…

We’ve stayed indoors all week because the weather has been horrible. Rain, rain and more rain every day. Early Intervention did come yesterday though and it was a special visit with both the nurse and occupational therapist. During the visit we scheduled an appointment with a nutritionist, which the OT will attend with us, and then the nurse is actually going to come to our GI appointment which is a week after the nutritionist appointment.

The nurse has worked with other kids who go to our GI doctor, and she said that it seems like Periactin is his drug of choice and how he doesn’t really offer up Duocal as a way to increase calories without increasing volume. The nurse said that if we didn’t like our GI doctor that we could go with another one, possibly one that works with the nutritionist. She said that since Liliana has a G-tube, she would most likely need a GI doctor for several years and it would be best to have a doctor that we can develop a good relationship with.

Liliana’s actually eaten a lot these last 2 days. She still likes the soup, and I’ve started giving her country vegetables baby food. Once that’s in front of her, she just starts chowing down. The nurse suggested adding melted butter or seasonings to the baby food so that it would be more appealing to Liliana…I think I’d be okay with adding butter because of the calories, but I’m not so sure about sugar or salt. Seasonings like oregano and cinnamon I’d be fine with.

The play mat tiles I ordered should be coming today from Fedex, but they haven’t arrived yet. I’ve actually started having Damien do tummy time on my bed (with the top sheet and comforter pulled off) so he wouldn’t be stuffing my hair and cat hair in his mouth, but he just succeeds in drooling all over. I think he has started to scoot backwards, though.

Liliana is really funny. If you give her a flower, she’ll stick it under her nose (almost inside it!) and sniff it. If you show her a picture of a flower, she’ll blow because she thinks it’s a dandelion puff.

Okay, it’s Liliana’s mealtime and I shouldn’t delay it for much longer. Here are the pictures, and I used some digital scrapbooking graphics from Shabby Princess. I hope you like them! 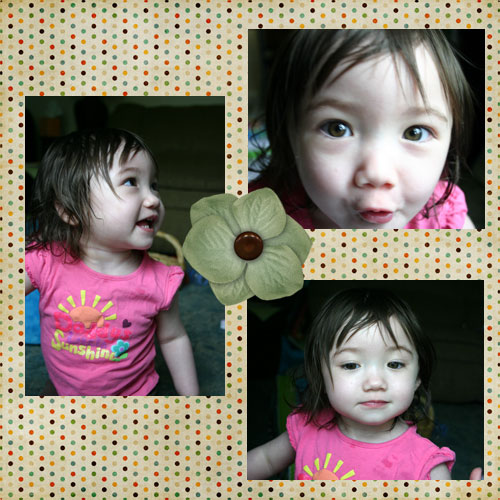 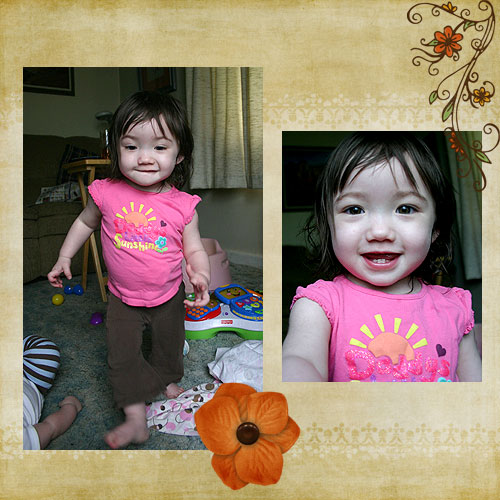 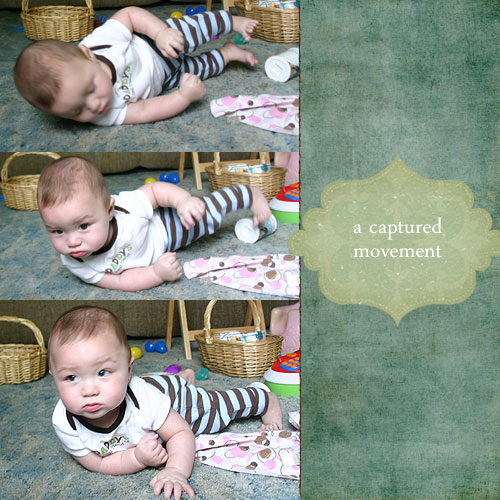 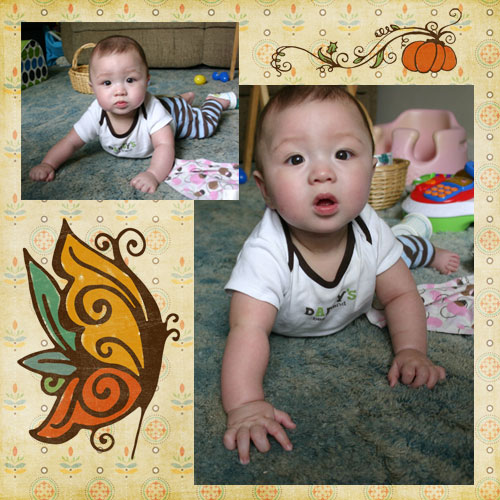 Oh, if you had large blank areas in the last post, that means your computer/internet/place of work has Flickr blocked.

Aaaand…Liliana’s new brace should be completed this upcoming week. I think I’m going to have to cut a lot of holes in some of her smaller onesies.