I hope everyone had a great Thanksgiving! We spent ours with Sean’s family and we all had a good time.

Liliana’s doing much better with eating solids. Yesterday she ate oatmeal and apples in the morning (about 3 ounces—almost the whole jar!), mashed potatoes during Thanksgiving dinner, and then later ate small pieces of banana. Sean’s mom and I tried getting her to pick up the banana pieces herself, but Liliana preferred to have her grandmother put them into her mouth. Liliana enjoyed it very much and chewed each of the pieces before swallowing.

I’m trying to make more of an effort to feed her solids regularly, so this morning she had some baby oatmeal. I think she’s progressing well with these oral feedings; she opens her mouth when food approaches and she seems happy during the feeds (until she gets tired of it).

The next thing we have to work on is drinking. I did get some WIC checks for whole milk, so we’ll use that for her “drinking lessons”.

It’s been two weeks since the surgery, so technically we can start giving her tub baths and putting the brace on her. I think, to be safe, we’ll wait until tomorrow or Sunday to start doing that. That way I’ll have Sean’s help (he’s working today) and it won’t be a big hassle to go to the hospital if her tube accidentally comes out!

As far as news on Damien goes, he’s doing fine in my (really big) belly! After some discussion on the delivery with Sean, we’re going to try it the natural way first. My scheduled C-section has been canceled so it’s anyone’s guess when Damien will be born. The OB did check me on Wednesday and she said that I seem to be 75% effaced and 1-2 cm dilated. She said that was fine, and she also gave me an order for an ultrasound to see how big the baby currently is. The only way I’ll be able to do an ultrasound though is if there’s an open appointment in the early morning; even then, I already have 3 other appointments this upcoming week. Busy busy!

Okay, picture time. These are from yesterday’s breakfast! 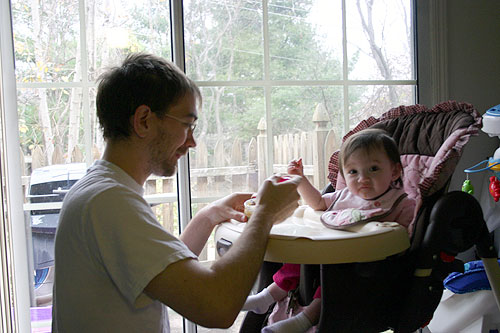 Eating oatmeal-apple puree while it snows outside 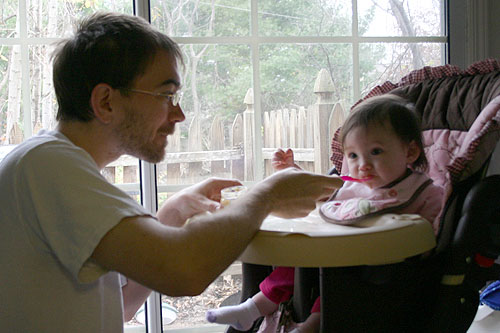 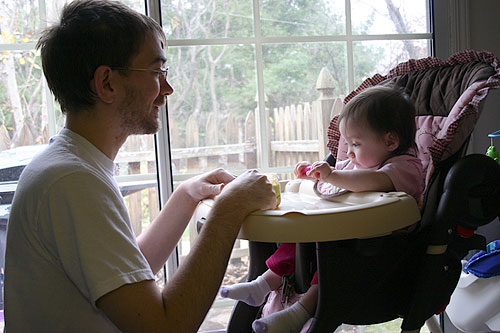 Sean trying to get Liliana to feed him. It didn't work out (I think). 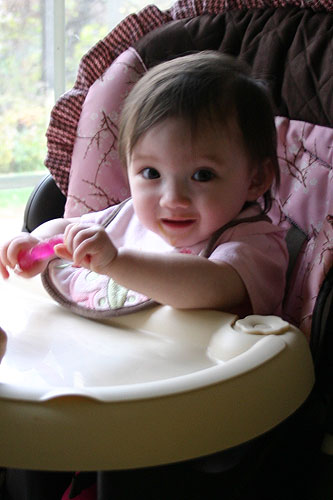 Baby Fashion Trend: The Goatee Made of Food