Another week has come and gone, and I’m so glad it’s the weekend!

Liliana loves to say “hi” to Damien and the cats, and loves to run around. Sean and I actually bought her some shoes last weekend. One pair is a size 4, and it’s a denim shoe with rhinestones…very girly. We also got her a pair of black and white Converse (just like Mom!) in a size 5; it’s gender neutral so Damien can wear them when he gets older. 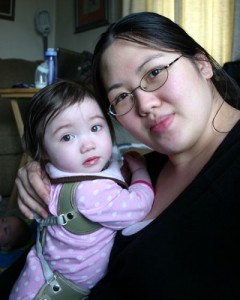 If it seems like Liliana is wearing the same outfits again and again in these photos, it’s because she is. Since Liliana has to wear a brace for her scoliosis and get feeds through her G-tube, there are certain pieces of clothing that work out better than others. In Liliana’s case, she needs either snaps or buttons down the front, paired with shorts or pants.

T-shirts don’t work because they ride up, and the brace’s straps (apparently it’s called a Kallabis Brace) then press against her skin. Very uncomfortable. She needs snaps or buttons down the entire front of her top because if she’s wearing the brace, we need to access her G-tube easily and the snaps help do that. So what we’ve been putting on her these last few months have been sleepers with snaps, which were fine because it was winter.

But now, the weather’s warming up (at least temporarily) and these sleepers make Liliana warm. Sometimes a little too warm. She woke up from a nap this evening very warm, so I changed her into regular clothes without her brace. It was a very cute pink outfit. Liliana was running around and playing with Grandma happily, so she was being very adorable.

So now what happens? What am I supposed to clothe Liliana in when the weather is too warm? I think all of the clothes with snaps that I have are long-sleeved. All of the rompers I’ve been finding online go up to either 9 months or 12 months, and Liliana’s outgrown some of her 12 month clothes so those won’t work. Specialized clothing for G-tubes are too expensive and not worth it. I may have to go the DIY route: find some 18-month onesies (either from Goodwill or clearance racks at first) and doctor them up by cutting a flap for the G-tube.

I think it would be cool—or at least a feat!—if I could incorporate snaps or velcro so that the flap could be shut when the G-tube’s not in use. There are patches that someone’s made to put over these holes, but they don’t interest me. Meh.

Earlier this week I had Damien propped up on the corner of the couch, and he kept pulling his body up so he could sit. All he ended up doing was get himself in a half-crawling position!

Don’t worry! I kept my eye on him so he wouldn’t fall off!

So I went and got Liliana’s Bumbo… 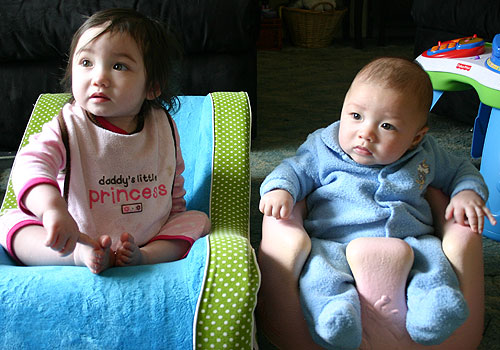 A moment when Liliana's NOT bothering Damien! Wow!

He seems to like sitting in it, but he does get tired out from it sometimes.

Damien is grabbing things a lot more often now, sometimes even trying to put them into his mouth! He’s doing really well.

That’s it for news so I’ll do a few more pictures to end this post! 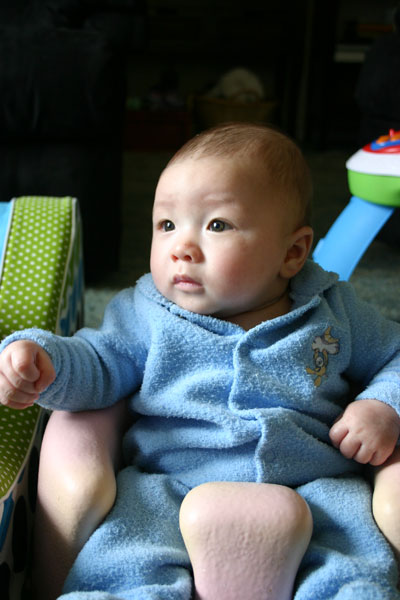 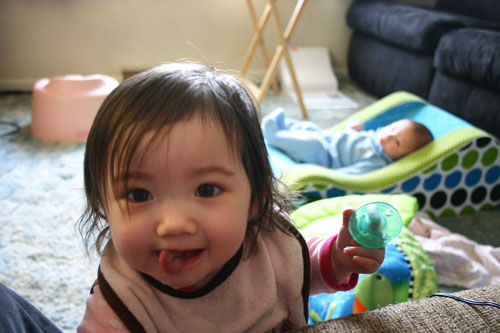 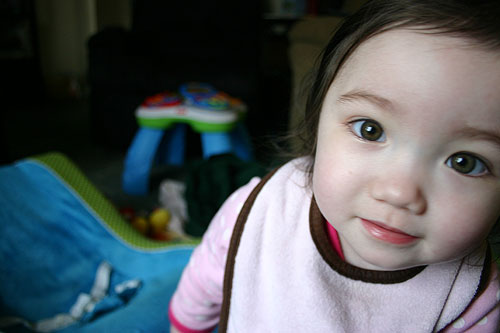