What a rough night last night was! Even though Damien had 5 or 6 oz of milk at 9-9:30, he wasn’t sleeping very well. He woke up every 20 minutes crying and dropped his pacifier several times, which made him start to fuss all over again. After the 6th time of getting up from bed, I decided that I had to sleep in the kids’ room that night.

I held Damien for a while until he was sleeping deeply; I guess that’s what he needed because he didn’t wake up or cry afterward! Liliana whined a few times, but calmed down after I turned on the Sleep Sheep (a stuffed animal that plays whale, rain and other sounds).

Liliana usually gets a feeding around 10 or 11 pm; last night I had decided to skip it because I didn’t want to wake up to turn off the pump when it was done (this was before Damien was fussing). I thought I would try it when she was deep into sleep, so I gave her the feeding around 4 AM.

It didn’t work out well.

She whined and coughed during and after the feeding. Come on! When can I get a break? For her feeding this morning I decided to try to give her a smaller volume; instead of the 180ml we’re supposed to give her, I gave her 160. NO COUGHING! Even though we’ve been giving her 180ml at each feeding, maybe her stomach hasn’t stretched out enough to hold it (though I don’t know why it wouldn’t). She did whine throughout the feeding though, and I had done it at a slower rate, so I don’t know what her problem is.

Speaking of Liliana, she’s learned a few new words! It bothers me every time we go to a doctor, they ask about her vocabulary. “Does she have at least 12 words?” I think so? It’s hard for me to understand the sounds that come out of her mouth sometimes.

Nonetheless, she’s able to say “eyes” and “teeth” now. Does it matter that she likes to point at ears when she says “eyes”? She does sometimes point at eyes when she says it though, and she always points at either her teeth or someone else’s teeth when she says “teeth”. She just needs more practice.

Damien is eating a lot. He’s also at the point where he’s trying to lift his upper body when he’s laying in someone’s arms so that he can sit up. His head’s still a little wobbly when he’s in an upright position, but I’m pleasantly surprised at how well he’s doing developmentally. 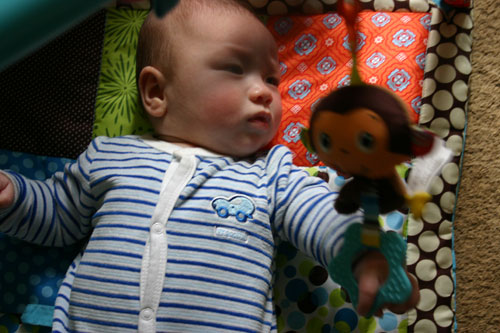 Damien on his tummy-time mat, holding on one of the toys with a finger. 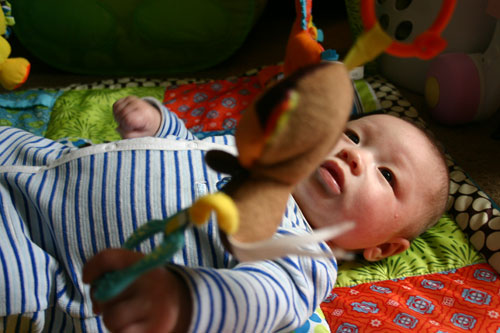 Can you see the single tear on his face? He cries during tummy-time sometimes and then I have to roll him over. 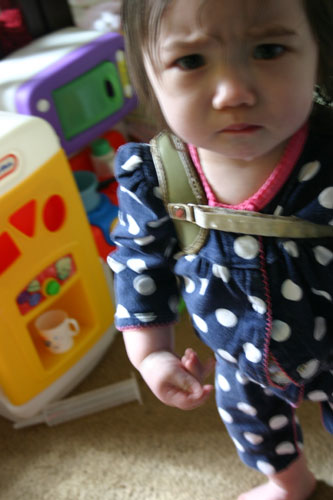 Liliana and her drooling sad face

Oh yeah, yesterday the kids had a nap. They both woke up at the same time crying. Must have been a darn good nap!