I’m so glad that today is Friday, but it’s still been rough. Liliana woke up in the middle of the night crying; Orajel didn’t help, but Sean taking her out in the car made her fall asleep right away. We also woke up early this morning for something (it’s a secret!) that we were going to do as a family. That didn’t pan out because there was a new policy of not allowing children under 7 years old. It was upsetting to say the least.

Liliana’s reflux has been acting up a lot, and I’ve been attributing it to either the lapse in her medicines or the fact that we’ve recently switched her over to formula. I hope that it’ll get better over the weekend, but if it doesn’t I’m going to have to call her GI doctor. With how things are and the fact that she’ll eventually get a G-tube put in (I think it’ll be a lot better than the NG tube), they might just do the stomach wrap so we won’t have to worry about the reflux anymore.

Other than that, she actually scooted backwards earlier this week! We haven’t gotten her to do it again; every time we put her down for tummy time she starts crying and won’t roll herself over.

There’s the slightest possibility that Liliana could have reherniated. I doubt it, though, because it usually happens to the babies who’ve required a patch for the hernia repair. Liliana’s hernia was small, and was sewn shut. She also hasn’t been having breathing difficulties; I listened to her lungs with a stethoscope Sean got us and they sounded very clear.

I have a lot of work to do (how good it feels to actually be making money regularly again!) so I’ll get on with the photos! These were actually taken last week, and her tape is dirty with the carrots Daddy fed her the night before. We’ve since replaced the tube and the tape.

In the first 3 photos, she’s sitting up on our bed by herself…and pretty well, in fact! She still falls over too easily though. 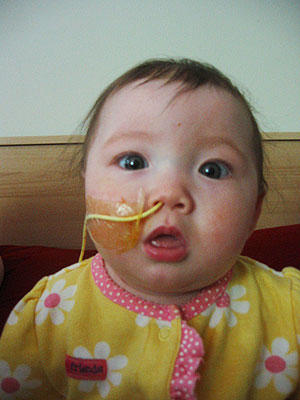 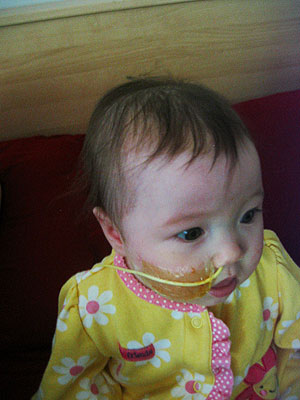 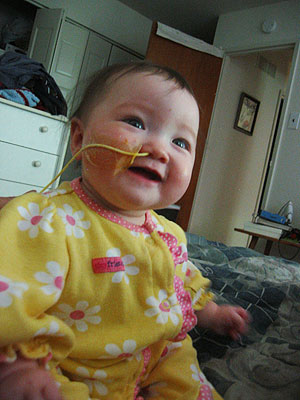 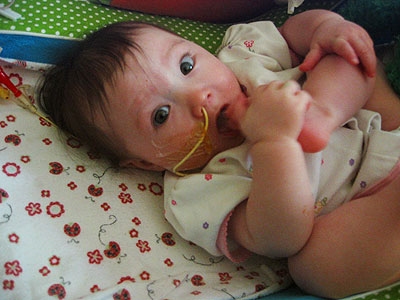 Sometime next week is Liliana’s MRIs for the spine and brain. I have to be at the hospital at 6:30 in the morning! Hopefully I’ll be able to take a nap somewhere!

OK, back to work!