This week has been an okay week. Liliana’s still retching and throwing up saliva, so she had a sick visit with her pediatrician on Tuesday because Sean wanted to see if she was sick or had chest congestion. I told the doctor that we’re concerned about her retching and that I thought it was from teething. She had it in the beginning of December, it went away for a week or two, and now it’s come back.

The doctor examined Liliana, said that her lungs sounded clear and she looked good; he checked her mouth and did find that she is teething. The pediatrician said it’s difficult to say whether or not the teething is causing her to retch (GI doctor said the same thing in December…basically that we have to wait until she cuts the teeth to see if it goes away), but he suggested getting in touch with GI since Liliana’s case is so complicated. I called and had left a message for the GI doctor; I haven’t heard back so I’ll have to call again. He has two locations so I’ll probably try both this time.

Damien had his one-month well visit yesterday. He weighed 12 lbs 2.4 oz, and that turned out to be the 92 percentile! Everything else—his height and his head circumference—were more average, to the tunes of 40 and 52 percentiles. His pediatrician didn’t say that he was gaining weight too fast, but she did say that we’ll have to make sure he doesn’t jump up too high on the chart. We would never hear that with Liliana. In fact, Liliana’s pediatrician said that her weight gain has slowed down, though I’m not sure of the accuracy of that fact as her weigh-in for hematology had her with clothes and a diaper on.

Liliana’s 15-month well visit is actually next week, so we should be able to see her growth chart and how she’s doing then.

This week I have photos of both Damien and Liliana. You can’t see in these photos, but Damien’s eyelashes have uncurled and are starting to look like he might have Sean’s long eyelashes. Liliana has some really funny-looking photos this week so brace yourself for some weird faces.

I’ll have to do a gallery. Damien’s being super-hungry and fussy and we have to go to WIC at 1 PM. Enjoy! 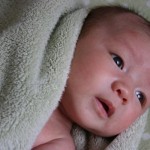 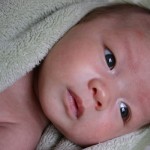 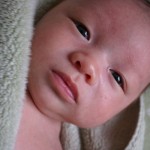 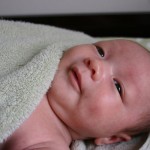 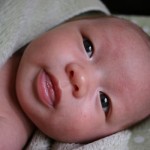 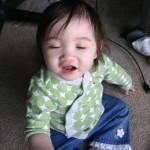 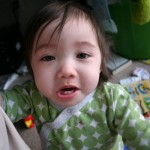 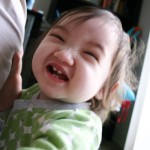 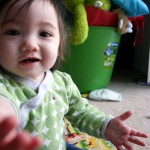 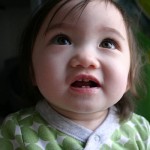