What a week! Last weekend we moved most of the furniture out of our apartment and into Sean’s parents’ house. Since then we’ve been moving our clothes and belongings, as well as organizing our new living space. There’s still a lot left at the apartment though, and we’ll be dealing with that and cleaning up this weekend. 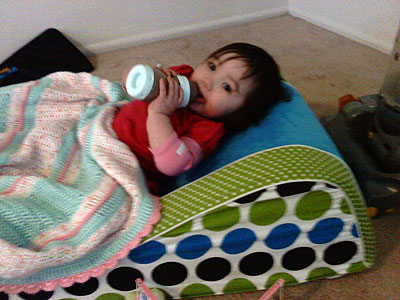 Liliana was playing with one of Damien's bottles by putting it up to her mouth. I filled another bottle with a chocolate-flavored nutritional supplement the GI doctor gave us so she could try it out. She didn't suck on the bottle (she never used one after her oral aversion) but managed to get little tastes of it.

Liliana’s walking is getting much better. She occasionally falls down, but she gets right back up and continues walking. I’ll be in the nursery, and she’ll walk right out of it on her own and into the living room. I think that’s her favorite room of the house, but maybe it’s because that room is the most familiar to her. Yesterday while I was in the kitchen, Liliana grabbed some magnetic letters off the fridge, put them on a kiddy-sized chair that’s kept in the kitchen, and pushed the chair everywhere—from the kitchen to the hallway and into the bathroom!

I think Liliana’s speech is improving, though it’s really hard to tell for me because I’m not used to interpreting kids’ first words. One thing that really stood out this past week is when I told Liliana that I was going to do something, and she said, “No”. Grandmother Kim was sitting next to us and she agreed that it sounded like “no”. Liliana hasn’t said it since, but I’m dreading the time when that will become her favorite word!

Damien is doing really well. He’s holding his head up at a 90 degree angle and has turned over 3 or 4 times on his own. Not bad for being 2 and a half months old. 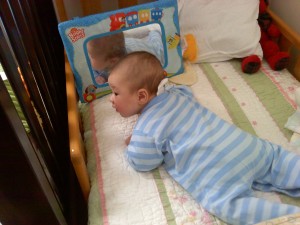 He actually sleeps through the night sometimes! I’m getting a more restful sleep and I think Sean is too. What might be contributing is that we’re no longer having Damien sleep on our bed in his sleep positioner, so we’re not subjected to every little whine, grunt, and squeak that comes from the little guy. Seriously, he’ll fuss around for a few seconds then go right back to sleep.

Sadly, those two pics are the only ones I’ve taken this week and they were taken with my phone. My camera is in some kind of purgatory because of the move, and I have no idea where it is right now. I’m lucky to have even found my laptop! Sean had packed it into a box, even though it was in its carrying case; furthermore, he didn’t label the box. So yes, lucky to find anything right now! And Sean, I love you but you’re silly sometimes.

Now it’s time to get tons of work done before packing the kids into my car (along with their sleep positioners, food, and extra boxes for the move) this afternoon to go to the apartment for some final packing. I’ll be glad when I won’t be so busy!