There’s this soup I make that is super easy—no soup stock required, just some diced tomatoes, tomato paste, frozen/canned vegetables and beans, sometimes a meat, and a lot of different seasonings—and I made it Saturday night. We’ve already known that Liliana likes to dip things into ketchup and lick the ketchup off, but it was definitely a surprise when she accepted a spoon of my soup…and kept coming back for more!

It’s sometimes hard to get Liliana to eat something a second time without her refusing, but I heated up some leftover soup today and she took 3 spoons without me having to push them on her. She had just finished eating about a half hour to an hour earlier so she shouldn’t have been hungry at all, which makes it even more surprising that she was willing to eat those 3 spoons. If she shows that she likes the soup consistently, I might just have to make a batch of the tomato broth and freeze it in ice cube trays for her.

Damien slept better than Liliana did last night, but we ended up adding rice cereal to his bottle of milk because he didn’t do well with spoon feeding. When I do it, he’s always pushing the cereal out of his mouth and it’s difficult to gauge whether he’s swallowing any of it. Also, he has a tendency to lean to one side in the high chair and in the Bumbo seat. I guess we’ll just have to practice more! Bleh.

Damien has been learning how to play with toys while on his stomach, and it’s fun watching him grab a toy train and moving it to and fro. If there aren’t any toys that he can grab, he ends up clenching hair from the carpet (even after I vacuumed the carpet thoroughly!) or if he’s on his tummy time mat or a blanket, he’ll grab it and try stuffing it into his mouth. Not really safe!

So I ordered this playmat: 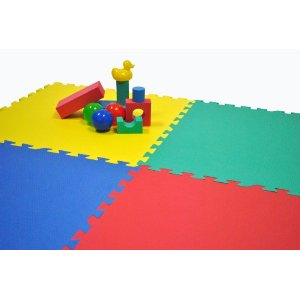 It’s not the cutest play mat ever, but it’s the most economical, functionally convenient play mat I found online. It’s only 2′ x 2′, so I eventually might have to buy another set (they’re currently $31.75 on Amazon), but even that would be cheaper than the other options I found since most 4′ x 4′ playtime mats are $70+. Also, most other mats are made up of so many different pieces that it would be a pain to pick them up and put them down all the time. For now, this should be good enough to stop Damien from choking on my hair!

That’s all I had to say. It’s Liliana’s lunch time so I gotta go!