A lot has happened this week—some good, some bad—but really, most of it is going to result in a long post with lots of complaining. I’ll let you know when I’ll start to complain so you can just scroll past the text and look at the pictures instead. It really is that horrible.

Let’s start with last weekend. We probably cleaned some, because whenever Sean’s parents are gone for the weekend, we clean the house some. Sean mowed both the front and back lawns, and I cleaned the kitchen. On Sunday, we went to Highland Orchards for some apple-picking. It was really interesting, but also really tiring. I didn’t think it would be easy to get the stroller out into the fields (there’s a shuttle that takes you to the fields, which is really a big open-air truck), so I argued with Sean to leave it in the car and he grudgingly did so. It turned out to be a huge—and heavy—mistake! 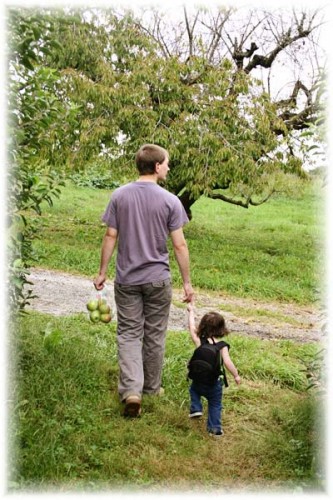 Sean and Liliana walking through the apple fields. Liliana's wearing her backpack for her pump feedings; with all the walking, she got very tired very quickly! 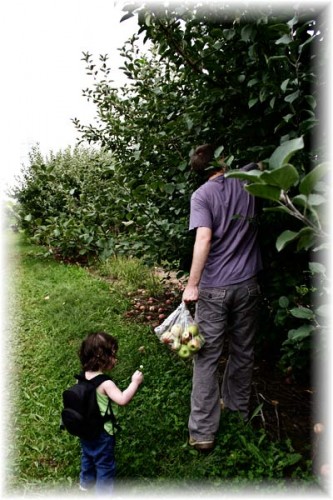 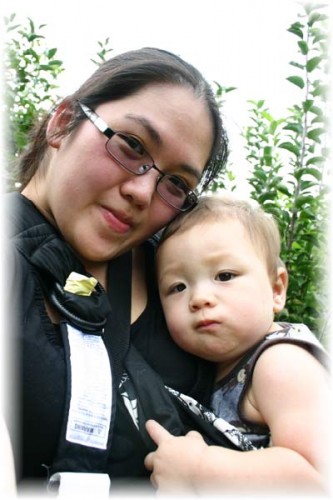 I carried Damien in a sling through the whole thing. Here I think he's eating a piece of apple I gave him. 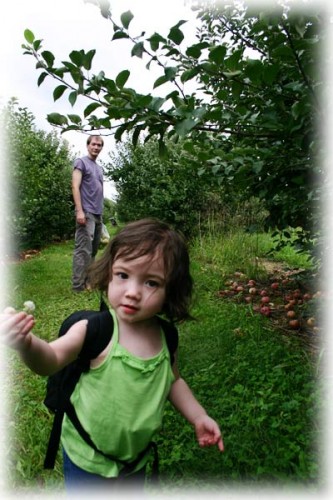 Liliana showing a flower I helped her pick

This past week, I’ve been doing a lot of cooking. I enjoy cooking, but it involves a lot of concentration because I usually have a lot of things going on at once. Mmm, eating home-cooked meals. Anyway, since we had so many apples, I picked up some pork chops during a midnight grocery shopping trip (when else do I have time to get out of the house by my lonesome?) along with snacks for the kids and some ham steaks that were on sale.

I made pork chops with apples Monday night, then used leftover lobster that my in-laws brought home from their mini-vacation to make lobster and ham fried rice on Tuesday. Kim made chicken patties on Wednesday (which I was planning to have happen anyway, haha!), and I made a hash using Andouille sausage last night. I don’t have any plans for tonight’s dinner, but I could make spaghetti and meatballs. However, I think Sean and I are tired of ground beef and meatballs and anything “beef” we would make at home. For some reason though, I don’t think we’re tired of restaurants’ hamburgers. Maybe it’s just a quality issue. 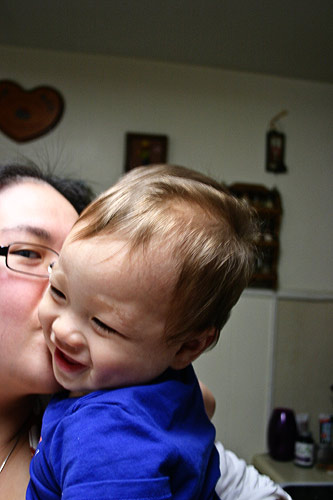 Okay, here’s where it gets bad. You don’t have to read this so you can skip to the last photo if you want.

Liliana’s medical supplies need to be replenished, so I called her DME (durable medical equipment) company on Wednesday. They said there was an open balance of about $1250, which amounts to several months of Liliana’s IV pole rental ($16.63 a month!) and one month’s worth of Farrell bags (about $1200…what?). I called Liliana’s secondary insurance and they said that the DME company is billing incorrectly. I get our DME to re-bill insurance; the claim for the Farrell bags said something about missing information, so the billing rep I spoke to said she sent it in to the insurance for review to figure out what they need.

The Early Intervention nurse and occupational therapist have talked to me about getting Liliana on a stool softener like Miralax. We had talked about it with our GI doctor, who said he’d give me a prescription for it. He didn’t, and when I called 2 weeks ago to ask him for it, I only got to talk to our GI doctor’s nurse since our GI doctor was off for the week. The nurse said the Miralax was available over the counter, and to give a teaspoon every other day.

I talked to our OT about it, and she said that I should call again because if I have a prescription, the 2 insurances should pay for it. I don’t like calling GI, but I finally did it yesterday.

I got a call back from the GI nurse. I told him I would like to get that prescription because we have 2 insurances that should pay for it and we also have a Flex card to pay for OTC meds as long as they’re prescribed. He asked if we tried the Miralax yet, and I told him no because I can’t afford it. He said, “It’s only $6 for the generic. You can get a small bottle.” I was audibly upset at this point…I have to worry about a possible $1250 bill and then $6 for a medicine that I could possibly get for free?

The thing that gets me is that the guy kept saying he can’t call a prescription in for something the doctor hasn’t talked about in his notes. I told him that I wanted to get the doctor involved so that we could get the prescription. I don’t expect people to risk their jobs for me, but I’d like people to actually do their job. If he’s supposed to be a contact point between the patient and the doctor, then pass along the message!

In the end, the nurse said, “Get the $6 generic, try it out, and then if it works, we’ll think about doing the prescription.”

I try to be smart about my money. I’m working until 2-3 AM because I usually can’t work during the day nor the evening because the kids are all over me. When I do go to bed, I have trouble falling asleep, and I barely slept Wednesday night because I was so uncomfortable. Aside from going to bed late, I wake up at 8 because that’s when Damien wakes up.

No one is really helping me with Liliana’s feedings (Sean does sometimes, but it’s very stressful for him) and during the day it gets to be very overwhelming because she gags all the time. If I’m feeding Damien at the time she’s gagging, I have to put him down to make sure Liliana’s not going to throw up, so of course he cries his head off.

As far as my money goes, I’ve had to modify how I get my diapers because I couldn’t afford 2 boxes of them at once. I’m still managing to get enough money for my credit card payment, though I might have to “borrow” some from Sean’s savings account this month because whatever money I earn in any given week through oDesk is delayed a week to ensure that the client is satisfied with your work.

I never buy new clothes for myself. I would like to go to Goodwill for the kids’ clothes, but I don’t have the time to do so. There are a bunch of consignment sales this Saturday for kids’ fall and winter clothes that I’ll try to go to, but I was only able to take $20 out for it. Kim recently bought some clothes for the kids, though I really didn’t ask her to, and while I appreciate the gesture, I’d appreciate getting the kids’ clothes myself because I tend to be more practical and discerning (or in other words, I’m cheap!).

I’m the same way when it comes to food. For example, we used to get yogurt melts for Liliana when she was younger. I don’t buy them anymore because they’re around $4, and other snack foods, like the cheese puffs and wagon wheels, are less than $2.50.

With the grocery shopping, I’m only able to go maybe once a week or every 2 weeks, and that’s with a strict budget of $20-$40. This past week I was able to buy the 3 proteins (pork chops, ham steaks, and chicken patties) for about $15; that was 3 dinners, and cost much less than pizza delivery for 4 adults.

To further demonstrate that I’m stingy, there was chicken ramen ($2.25), beef ramen ($1.25?) and shrimp or oriental ramen (on sale for $1). We prefer beef and chicken ramen, but instead of getting one of each (my first instinct), I remembered that we had extra seasoning packets of the beef and chicken at home. So I bought 2 oriental ramen packages.

OKAY, so. Back to the story.

With all the work I want to do (but don’t have time for), the kids to take care of, and then all this trouble with insurance and prescriptions, I lost it. I’m usually not emotional, save for that time of the month, but the stress has gotten to be so bad that I cried for an hour.

I’m not depressed. I don’t need counseling or therapy. I just need a break.

When the OT came for Early Intervention, I told her about the GI nurse and the trouble with the prescription. She said that was ridiculous and that she’d get our Early Intervention nurse involved. I also asked her about Lauren’s House, a special needs daycare close by, and respite. Our OT knew a lot about Lauren’s House, because her foster child goes there and actually, our Early Intervention nurse works there part-time as a co-director. Our OT said that we would probably qualify for 10 hours of care because Liliana has overnight G-tube feeds. We would qualify for more hours if I work or go to school.

As far as the OT session went, she had brought a whistle and a party blower for Liliana to work on her blowing muscles. Liliana was only playing with the whistle and pretending to make the whistle sound, but Sean managed to get her to blow correctly in it last night. It would probably be fun for Liliana to get a recorder (the flute-like instrument) because she likes music.

So…if we get Liliana into Lauren’s House for a day or two a week, that would really help me out.

Anyway, I have to bring in Liliana’s medical supplies (they just arrived!). Yay, 50+ lbs of stuff and in 8+ boxes.

Here’s one last picture of Liliana stacking. She would stack things up and then walk into her stack to knock it down, saying “Ow, ow, ow!” 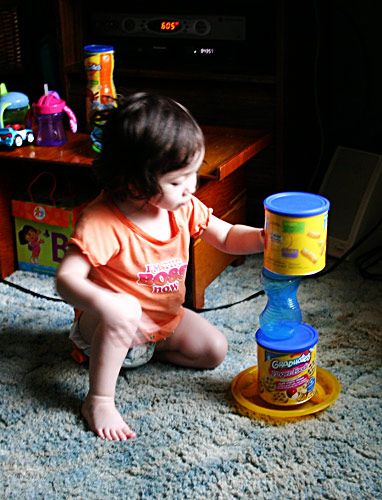