Liliana’s suffering from allergies or teething (or both—ick!). She’s been more gaggy and full of mucus since Monday, and that’s severely affected her tolerance for feedings. We didn’t get Farrell bags this month because I didn’t want to have to pay for them if insurance denied payment, so that’s working against Liliana as well because there isn’t anything relieving the pressure in Liliana’s stomach during a feeding.

Tuesday and Wednesday were probably the worst: she didn’t get her 1000 calories those days, and she would start gagging with only one ounce in her stomach. I gave her some water yesterday morning that helped her get the mucus out, and I also gave her water this morning, but she hasn’t gotten much mucus out yet.

It seems like she’s doing much better today however. She tolerated her omeprazole and 3-ounce flush of water this morning, and only started gagging after 4 ounces of her formula (much better than gagging at only one ounce). She learned how to “stomp” and she was cheerful enough to dance around for 5 minutes straight.

We went to Lauren’s House on Wednesday morning. The people there were very nice; the receptionist seemed very affable, and she showed me a picture of her son’s family because her daughter-in-law is Chinese and they have a daughter and son, just like my family. However, they live in California, so the receptionist said that she’d adopt my kids instead.

One thing that I thought was nice about Lauren’s House was that they take daily or weekly weights for some of the children. If Liliana were to go there, they would definitely take her weight on a regular basis to make sure that she’s gaining.

There were a lot of children and babies there, as well as lots of toys. They have their own enclosed playground, as well as a feeding room, procedure and diaper-changing room, a preschool room, and various other rooms. They also have a room with toddler beds for naps where Liliana could pick out her own bed and sheets. They also have a laundry facility and a full bathroom, so if Liliana were to throw up, they can wash her clothes and give her a bath.

I think it’s definitely something we want to try, so I’ll be completing the paperwork this weekend to apply.

Liliana wasn’t feeling too well at the beginning of our Early Intervention session yesterday. She was rubbing her eyes, bending her left foot and saying “Stuck!” when we sat her down for eating, and being very uncooperative. Before the session, she really wanted her shoes on so I had her wear them for a little bit and then took them off.

We put socks and shoes on her, and she felt much better…but then she started going towards the door as if she was going to go outside. I thought it would be nice for her to go outside and that it might motivate her to cooperate with us, so I put a hooded sweatshirt on her and we all went outside.

She walked and jumped on fallen leaves, making them crunch under her feet, and found a tiny flower that the OT helped her pick. Liliana later found a larger flower, and she was able to pull it out herself. We went back inside and Liliana kept playing with her flowers. We played with a whistle and the harmonica for a bit, and after a while I did get Liliana to eat a few cereal puffs without my asking.

I just put one on the table she was sitting at, she grabbed it, and popped it into her mouth. Once she was finished with that, I put another on the table, and she kept eating like that. I then put a cereal puff in the pocket of her sweatshirt, and she dug it out and ate that as well. So on and so on.

Liliana is learning a lot of words. Yesterday, her word was “noise”. Whenever someone would blow on the harmonica, she would say, “Noise!” and cover her ears. Kim had gotten Liliana some flash cards a week or two ago; the other night I had shown some of them to Liliana and some of the words Liliana hadn’t said before, like “girl” and “doll”. Last night, I showed those flash cards to her and she was able to say those words pretty well.

She has some trouble enunciating certain things, which I guess is normal for this age. The “cr” sound is hard for her and I think she’s still saying “circle” as “cirdu”.

Damien is now standing up by himself for a minute or two. He’ll pull up to stand and will let go so that he’s just using his feet and legs for balance. The two teeth alongside the two top front teeth have finally come out, and I think his next teeth are going to be the two next to those! I don’t feel anything along the bottom next to his two first bottom teeth.

Last Saturday we were celebrating the October 3rd birthday of Sean’s brother. I gave Liliana a bath and took the time to take out all the tangles in her hair. The back of her hair has been tangled for so long, there were 2 parts that looked like dreads! So I found a comb and combed the tangles out, and then put her hair up in pigtails: 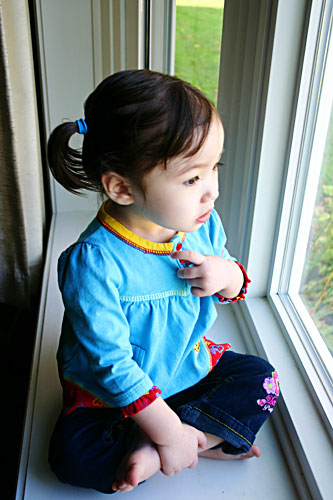 Her hair did get messed up in the car because she fell asleep and a pigtail came out, but she still looked cute bowling: 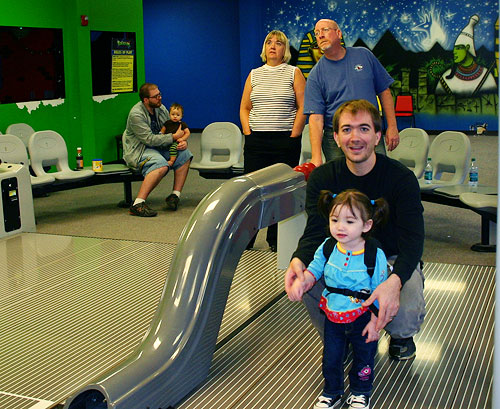 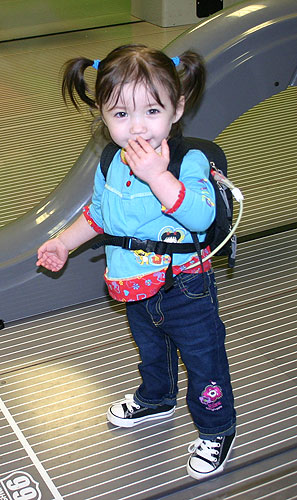 My other pictures are from today. Damien loves playing with my planner, and Liliana always comes along and squishes him or tries to push him out of the way when he’s near me on the couch: 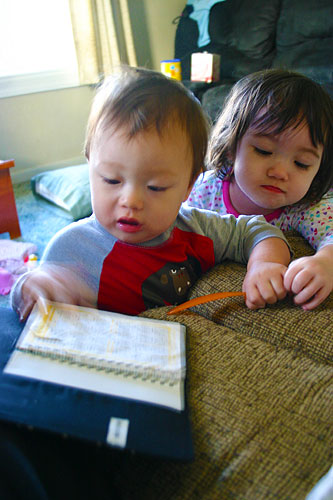 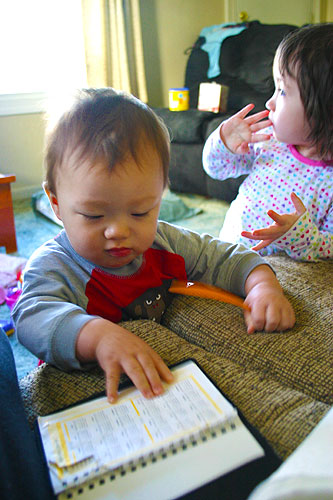 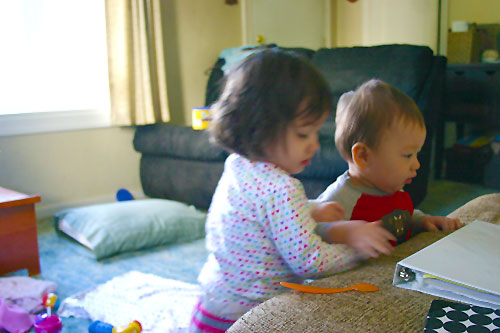 Okay, I think I’m done. I have a dirty diaper to change.