Whenever I write a blog post, I hear good feedback, so I thought I’d share some thoughts with you.

Things have been going well for us recently.  As many of you know, I have a new job.  I recently got back in touch with my best friend.  Liliana is growing well though still has plenty of obstacles to overcome.  Damien is a monster and has a great personality.  And lastly, things are going great living in a new place.

My new job is with ING Direct.  It’s a fantastic place to work, has an amazing culture, and includes so many opportunities.  It is about 30 miles away though, and from my house, there are no highways directly there, so I struggle to average higher than 35mph.  Generally, it takes me an hour of single-lane double-yellow driving down narrow back roads.  I’ve gotten it down to a science now, but find myself getting a little tired of this one same ideal route each day.  Other challenges include a future period of being on call and a rotating schedule which puts me on 10-7 for four weeks.  I don’t need to mention how awful it is to get home at 8PM at night.   At least I’m starting to mold into the culture better finally.

My best friend who used to live across the street finally picked up the phone about 6 months ago.  I’ve been concerned that moving 15 minutes further away would hinder our ability to hang out, but so far it’s not been the case.  It is a huge stress release having a good friend around again.

Liliana continues to struggle in some areas.  She seems to have allergies or some mucus drippage.  Much like her father, mucus tends to collects in her lungs overnight.  She has to cough mucus out every morning.  But it doesn’t come out as gagging, this is cough-wretch-wretch-wretch-choke-wretch-choke-cough and it goes on like that for an unbearable five minutes each morning.  It apparently also happens during the day, its frustrating.  At least she hasn’t been getting pneumonia, bronchitis and all those other irritated bronchial tube infections.

She also continues to not eat.  There are points in time where she’ll actually ask for snacks, will know which ones she likes and doesn’t like, and will eat them herself.  Sometimes she struggles to know how many to put in at once.  Other times, she’ll go for what seems days before eating anything.  One taste is all she usually wants.  And then, there’ll be odd moments where she’ll take a whole baby carrot and just shove it into her mouth.  Luckily, she just wanted to taste it, and the carrot immediately just slid right back out.  We do have an occupational therapist working on eating with Liliana, but I, frankly, don’t see much progress.  We are trying to have more meals at the kitchen table as a family, but all she does is pretend to eat, and will almost never actually eat or drink anything.

Her speech is poor for her age.  Her vocabulary is vast, and she understands a great deal of words and complex sentences, but can not say a lick of them.  Today, Mercy and LIliana were looking at a book about the letter “i”.  One of the pictures was Ice Cream, so Mercy tells Liliana, “Go show Daddy this picture.”  “Go show him.”  30 seconds later, she comes tromping into the room, holding open a tiny cardboard book that shows a picture of ice cream.  She even held it open to the right page.  It does get depressing sometimes when other people talk about “My son knows all the names of the kids in his preschool class” and yeah, he’s the same age as Liliana. That’s just an example of how behind she is.

Damien is a monster.  Luckily, he’s the good kind of monster.  Haha, he likes rice cereal, he likes to sleep.  He likes to eat eat eat and then sleep some more.  He’s growing fast.  His physical features are strange.  His hands are huuge.  Like Liliana, he’s got the Chang fingers, where the widest part of the finger is the segments instead of the joints.  Looks like tiny delicious sausages.  His arms are also long an apish, which could come from my side a little.  Besides that, he has a very asian skin coloring, and we believe he shares a lot of physical and mental qualities with Mercy’s brother, Wah.  He’s a very stocky little guy with a big chest and a large appetite.  His laugh is infectious and his smiles will light up a room.

We also moved to my parent’s houses recently.  We live in two adjacent bedrooms on the ground floor.  It is mildly cramped, and we all had to make serious amends to our lifestyles to adjust.  Yet, I don’t regret it in the least.  We have a lot more support when taking care of the kids, and Liliana really really benefits from interacting with a more animated character than either of her parents (Mercy and I are both rather reserved).  We’re all struggling with boundaries and how to define them.  I feel like the rooms that we live in are ours, but they clearly aren’t.  We’re barely even renting.  And, as we all expected, some of the utility bills have doubled.  I really don’t want to create resentment, so am always mentioning my concern with that bill and this bill, and am trying to keep abreast of how their utility bills are looking.  BUT, our financial goal in moving in here was to save money and reduce debt in preparation for buying a house.  I can’t do that if I’m getting a fancy mobile phone (people laugh when I pull out my phone), buying clothes and supplies to work out in the gym at work fashionably (I’ve heard people gossiping about a guy who does yoga in his work clothes during lunch, how gross!), or helping to pay doubled heating bills.   The good news is that we’ve now been hear since March first (two months d0wn), and my financial goal has been an astounding success.  Working for a bank that likes to educate its employees does help.  I’ve had more good financial advice in the last 2 months than I’ve had in 10 years.

Did post some pictures on Facebook if you want to go look.  Just a couple of cellphone pictures again.  Here’s my top three from the uploaded pictures: 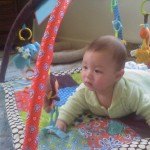 Here’s Damien socializing with his monkey. 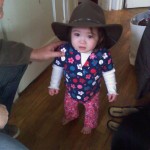 Liliana is a sad cowboy. 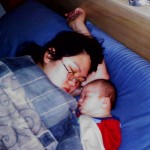 And this is my Favorite picture of all time.