If you hadn’t noticed, I’m super late with the photos. Excuses…I have tons of them.

In any case, Damien is getting several of his molars in at once (along with maybe a few other teeth?) and he’s been having a wretched cold…one that’s spread to his eyes. So he now has pink eye, and also a mild ear infection. He’s on eye drops, which I hate administering, and we’re waiting to see if he gets any crankier before subjecting him to more antibiotics.

After all, we wouldn’t want this happening to Damien after it happened to Liliana: 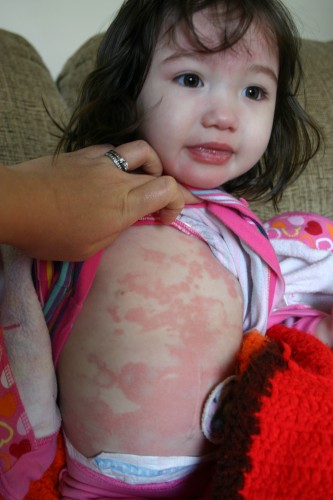 Oh, Liliana’s ear infections came back last week, worse than ever. She got put onto zithromax, which worked beautifully. Only 5 doses to give, and along with some probiotics, her BMs became normal almost immediately.

She’s doing a lot better now, and I think she’s actually starting to eat more. We’ve started giving her breakfast, and I’ve been alternating her between Nutella pancakes and an Eggo waffle each day, which should be followed up by a little yogurt cup. The nurses at her daycare are saying that Liliana’s eating all of her yogurt at breakfast and yesterday she ate 8 bites of her waffle. Last night, she ate a few pieces of strawberry that I put with her dinner (she refused the rest of the dinner), but ate a bunch of cereal puffs and multi-grain Cheerios later.

I think she still has problems with drinking, as if she sips too much at a time. She’ll take a few sips of Banana Pediasure (or Vanilla if I have it) or juice, but the most success we’ve had is with these weird fruit pouches that we call Fruities. It’s like baby food in a drinkable pouch, so it’s a lot less messy than a spoon and a jar of baby food. The downside is that I can never tell if the seal’s been broken on them, and I think we’ve had a few that weren’t as full as they should have been. Both the kids love them though. And Sean. He likes drinking Liliana’s leftover juice, so of course he drinks the rest of Liliana’s Fruities if she doesn’t finish.

It’s about time I start on dinner, so I’ll post this collage I made on Photovisi for free. I did it quickly–my composition could have been better for sure if I had tried harder. You can click on the image below for the full 1024×768 version. 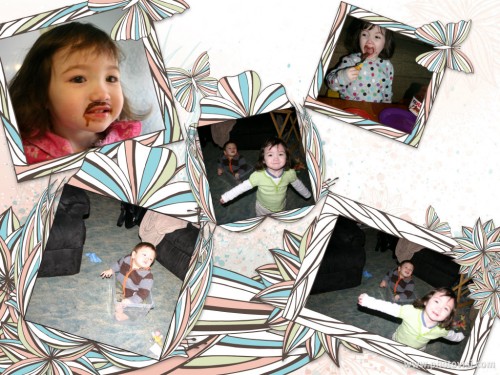 Maybe I’ll post this next Sunday’s photos on time if I can get enough work done, but it’s probably not likely to happen because Damien’s staying home for the rest of the week. Okay, I’m going! Bye!