This past Tuesday I went with Sean for my 36 weeks and 2 days checkup. The trains were running slow that day because of bad weather and we ended up late. When we got to the hospital, we were brought in for the ultrasound almost right away. I hadn’t had a chance to use the bathroom so the images we were getting on the screen were a bit dark, as if we were looking deep underwater.

In any case, the nurse told us that our baby was good and weighed about 6 pounds. A doctor came in afterwards and told me that while I’ve been able to hold off going into labor for this long it’d be better for the baby, because of her CDH, to be born after 37 weeks. Therefore I should stop taking the nifedipine at 37 weeks, which would be this upcoming Monday.

Apparently, we didn’t have to wait that long.

Sean and I then went to do the non-stress test. I had 3 contractions this time, which was surprising to me because I had none the previous test. The midwife decided to check my cervix and found that I was dilated 4 cm. When I was going into early labor around the beginning of October, I had stopped at 3cm.

The midwife discussed this with the doctor and they decided that I should be observed. I was admitted into one of the Special Delivery rooms and given an IV for fluids. Sometime during the day my contractions had leveled off, but when my cervix was checked again I had dilated up to 5cm.

They kept me overnight. Sean and I didn’t think it a big deal and we believed that I would be able to go home the next day, so I sent him home in order for him to be able to go to work.

We were wrong! The doctors and midwives had a meeting Wednesday morning to see if I should go home or not. They decided, since I was dilated 5cm and at risk of going into active labor, to keep me at the hospital and have me give birth that day.

That Wednesday is such a blur in my memory. So many things happened! I’ll try to rake through what I remember and break it down into times of day.

The Morning: I called Sean and told him the news so he could be on his way. I was started on an IV of pitocin (oxytocin) and a clear liquid diet. Sean arrived in the late morning or early afternoon.

The Afternoon: I had a lunch of broth and gelatin. Sean’s mother decided to come to the hospital and once she arrived, Sean went with her to have lunch in the cafeteria. This was around 2 because after they had left, one of the doctors came in and broke my water.  The contractions picked up quickly after that.

Late Afternoon / Early Evening: The pain from the contractions was getting so bad that I began shivering from them. After I couldn’t take them anymore, I requested an epidural. After the epidural was completed I was still feeling pain in my pelvic region, but that was Liliana’s head going through the birth canal I guess. And since I received an epidural, I also had to get a catheter. It was very unpleasant.

My cervix was being checked periodically and after it was dilated to 10 cm, I had to push whenever I felt pelvic pressure. It took me a while to get accustomed to the pushing. Relax the legs, open them farther, don’t strain your face, just put all that effort into pushing in your lower region!

It was painful, it was strenuous. Sean did so much for me by just being there and stroking my head between pushes.

So I pushed and pushed and then all of a sudden I felt something being pulled out of me and then it was just relief all over. 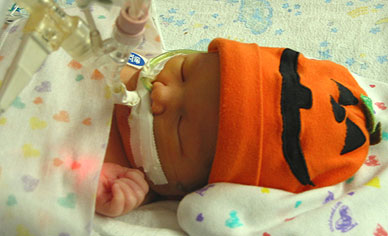