I am so proud of my baby girl! She is off the ventilator and instead of all these tubes down her throat, she only has some nasal cannulas (those little breathing tubes you see in people’s noses that aren’t very invasive) and a small tube to suction her stomach. It’s so amazing, considering that Liliana has been under a week old when she was taken off the ventilator!

Yesterday when I visited, I was able to hold her for the first time. She fell asleep in my arms and made some of the cutest faces. I held her for about an hour and she was mostly calm throughout. Whenever she started getting fussy, I soothed her with my voice and she settled down pretty quickly. Holding her was great and is something I expect to be doing a lot more of soon!

Later on, the grandparents spent some time at Liliana’s bedside. After that, Liliana’s daddy had his turn at holding her for the first time. 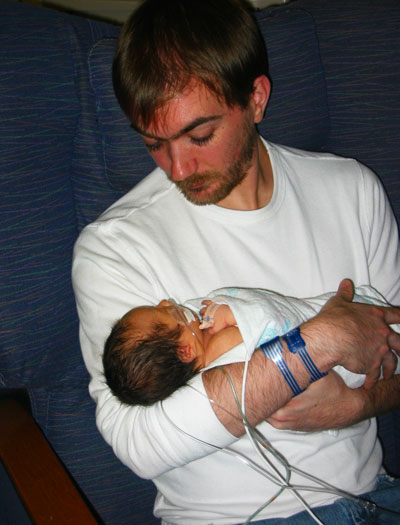 After Liliana was returned to her bed, Sean read her a book and made faces at her. When we were getting ready to leave, Sean thought Liliana was asking for her pacifier. He popped it in, she sucked on it a few times, and fell asleep instantly.

I’m catching up on laundry today so I will most likely visit Liliana again tomorrow. If everything has been going well with her, she should be able to get my milk by then!