I am so glad that it’s Friday. This week has just been a huge load of stress, and I’m looking forward to spending time with Sean and (hopefully) catching up on sleep.

Last weekend was a big one. We were celebrating my birthday (May 9) on the Saturday and then of course it was Mother’s Day on Sunday. Saturday we started off by having brunch at an Asian buffet called Noboru. It was really good and they had so much variety in their sushi! It’s definitely a place I’d like to visit again. After brunch, we headed to Jenkins Arboretum. I took a ton of pictures and posted them on my new Flickr (it’s a photo-sharing website). These are my favorite ones: It’s a beautiful place but it was too much nature for me, and there were so many paths! And inclines! It was a workout just getting out of the place.

Sunday was less eventful, but still busy because everyone was running errands…and then the week started!

Monday was horrible. I drove the kids down to CHOP in Philly to get Liliana fitted for a new brace. Instead of the Calibus brace, I think this new one will be more like a clamshell brace, maybe like this? Anyway, fitting Liliana for the brace involved putting very tight shirts onto Liliana, and then wrapping a very sticky tape around her abdomen. The orthotist then squeezed the tape against Liliana’s body, and the tape eventually hardened to make a mold. Liliana was pretty good during this part, but Damien wailed and wailed.

Wednesday was an OB appointment for me. It’s not fun to have your insides checked out.

Yesterday was occupational therapist day. In a nutshell…

Okay, enough Liliana news! Damien has been pushing his chest off the ground, and even moving his body around in a circle on the floor. When he’s having tummy time he likes to grab toys and stuff them into his mouth. He even tried grabbing Liliana’s leg! He once was up on all fours according to Grandpa, and he does sometimes push his butt off the floor if he’s not pushing his chest up. 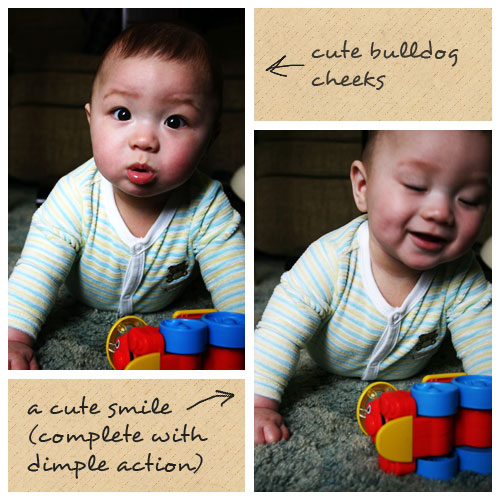 Damien has been crying in the middle of the night, and I think it’s because he’s going through a growth spurt. I tried feeding him extra last night, but he still cried. He usually calms down and goes back to sleep if I hold him or (gasp!) co-sleep with him, so I usually take the easy way out and just try to get as much sleep as I can. I’m still super-tired.

Okay…tired, sleepy. Gonna try to take a nap, else I might randomly collapse later!