I’m writing this now (at 1:40 in the morning) because I have to go to CHOP during the day to pick up Liliana’s new back brace and I wanted to get this done with!

A lot has happened this past week! Liliana got to play with a girl that was slightly older than her on Sunday, Sean turned 26, and Liliana learned some new words like ‘owl’ and ‘bed’. Damien has been getting a lot stronger with pushing himself up off the floor and with him turning around while on the floor, he sometimes grabs things he shouldn’t. He really likes grabbing cables, and that’s a big no-no.

Liliana got to play in a kiddie pool this week: 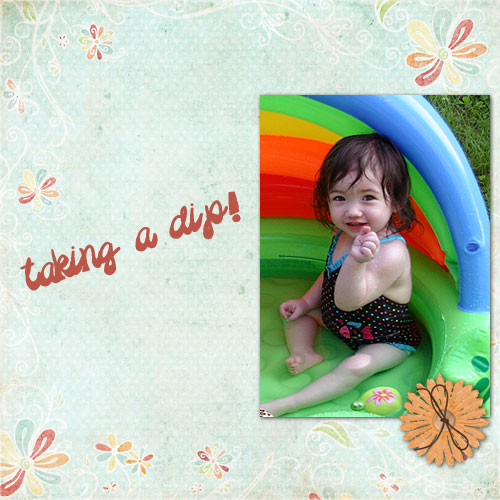 Hopefully she’ll be able to hang out in the kiddie pool as much as she wants this upcoming weekend. She’s always yelling bloody murder when I take her out of the bath! She likes water that much.

Okay, let’s get to the nitty-gritty so I can pump and go to sleep.

Liliana’s been having trouble lately with throwing up mucus. She sometimes brings up formula, and that’s not good at all because she has to try super hard to get it out (because of her stomach wrap surgery). Sean thinks it’s allergies; I don’t know what it is but her molars are on the brink of popping out of her gums. Anyway, I called GI today and they suggested giving her 2ml of her medicine in the morning along with her normal 4ml at night. Hopefully it’ll have enough of a good effect and won’t make her too sleepy during the day.

The Early Intervention session today was pretty good. I made Liliana’s favorite soup earlier in the day, and she had several bites of that. We also did drinking with the OT today, using a special cup that has a curved cutout on one edge so that when you tip it up, the cup isn’t around your nose. Liliana drank some milk mixed with yogurt, which she seemed to like a lot.

Okay, I have Liliana’s last Thursday feeding going and I need to pump. I have a lot to do tomorrow, like finishing up a few things for a client and getting ready to take the kids to CHOP (ugggh). I do have more kiddie pool pics, but I can’t deal with them at the moment. Maybe later this weekend? Oh, that’s what Flickr is for. I’ll just upload them to Flickr. If you want a link to it, it’s on the right hand side of the website.