Mercy here. I know it’s been a long time since we’ve last posted. A lot has happened, especially with Grandpa Tapscott passing away and our kids growing up so fast that it’s sometimes hard to keep up!

Well, Liliana hadn’t been doing very well with eating earlier this month (she was probably sick), but she’s gotten back to her usual appetite. She’s also started to wear underwear to daycare because of how often she would wet her pullups and she’s been doing well with it (only an accident a day at the most). I also cut her hair this week—her hair always tangles when long because of sleeping and she can never keep hair ties in her hair. Her current bob is so much easier to maintain, and I thought I had cut a part of her hair too short…her hair was very forgiving and you couldn’t even tell! Damien also had his hair trimmed a bit. 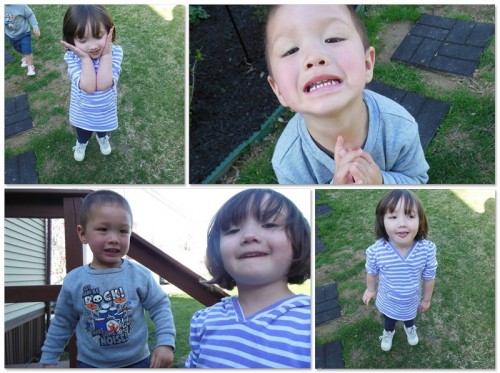 Damien has been in the toddler room at daycare for a while. At first he would cry when I left him there, and would cry and hide under the table when I came to pick him up. He was fine for a week, and now he’s started crying when I drop him off. At least he’s happy when I come to pick him up!

This probably won’t interest anyone, but we’ve started a vegetable garden in our yard. Sean built a raised garden bed; the cardboard kills the grass and eventually breaks down to feed the soil, while the mesh is to keep animals out from underneath. We’ve planted a used celery stalk, some used bok choy stalks (they’re regrowing so slowly!), and then broccoli and spinach seeds (both types have already sprouted!). I also have tomato and strawberry seedlings inside, and am trying to start some pepper seedlings. I’m also planning to have sunflowers, green onions, cilantro, and some other flower, but those I won’t be able to do until the end of the month (frost dates, don’t ya know). We also added some phlox and another flower next to the house because we moved our blueberry bushes. 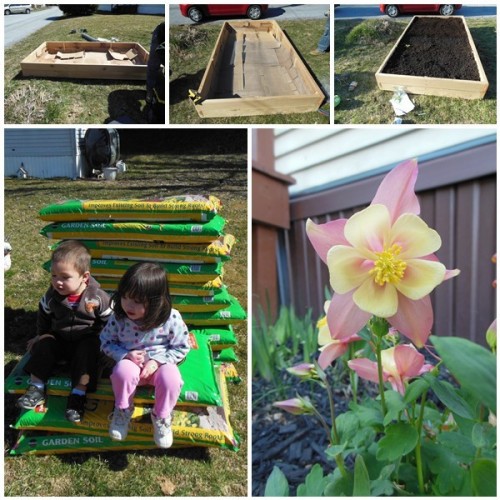 I hope everyone is doing well!