Hello! I’ve taken a couple of photos of the nursery, which is basically just the crib and the changing table on one side of the room. The other side has two bookshelves (anchored of course!) holding 95% of the books in the house, a floor lamp, and an ottoman that 2 people can sit on. It sounds and looks boring, so there are no photos of that side. 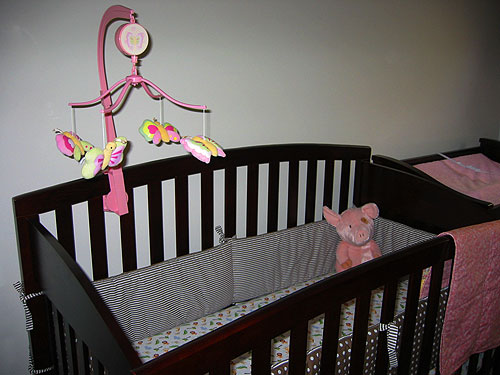 So, here’s the crib! The butterfly mobile was a pain to assemble. The butterflies themselves have a string attached to them with a knot in the top. You’re supposed to thread the knot and the string into a hole at the ends of the plastic arms, and then pull the string through a tiny crack to a smaller hole. The knot rests on top of the hole and that’s how all of them hang. The string was thicker than the crack and so it took me several minutes to do each butterfly.

Sean definitely wants to have a boy in the future so I, armed with gift cards, shopped online for gender neutral bedding. This bumper was reasonably priced and could match with almost anything. I’m not in love with it, but I’m not entering into any contests for Best Nursery Ever.

When I was clearing up a few things in here yesterday, I thought the walls were drab and so I ordered some cute wall decals. My dilemma on that was whether I should go pink and girly or gender neutral but still cute. In the end, I went with Carter’s Tree Tops wall decals because I fell in love with them when shopping for a crib at Babies ‘R Us. How can you go wrong with adorable forest animals? 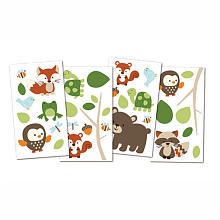 The next photo is of the corner that has the changing table. On the right side is an antique rocking chair that Sean’s parents gave us and is the place where I most likely will be spending a lot of my time breast-feeding. Hanging from the ceiling are some paper balloons. We have more hanging around than these four camera-shy ones. For example, Sean has a bulldog paper balloon hanging right inside the nursery door to serve as the guard. 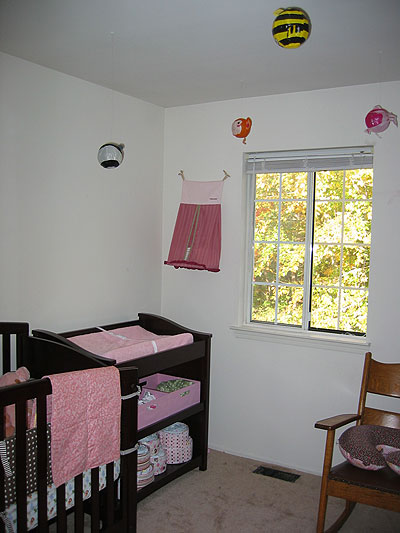 One corner of the nursery

While we do have the crib mostly ready, we still need to do a few things before the nursery itself is done. Sean and I both hate the floor lamp that’s in there so that will need to be replaced. We also have a rather large humidifier in that room that needs a permanent location (considering I just displaced it yesterday to make room for some seating). There is also a need for a trash can in there for diaper changing, which is easy enough to do with a trip to Target, but I am still on bed rest.