Sorry that today’s post is a little late! Liliana actually slept in this morning, giving me a chance to do the same. Unfortunately, now that we’ve moved Liliana back into the crib and she’s been having teething/gagging problems, she wakes up in the middle of the night crying and wailing. As a result, the past few nights haven’t been very restful for anyone except the cats.

Liliana’s teething is making her drool uncontrollably. We’ve started using bibs again, and she can soak one in an hour. I’ve been trying to put her into positions that will let the saliva drip out of her mouth instead of down her throat because she’s been gagging and throwing up all this excess saliva. Thankfully, she has the fundoplication so she’s not throwing up any of her calories, but it’s still unsettling that she’s doing this.

The GI doctor, whom we saw on Wednesday, said that retching with a fundo usually occurs within the first month. He gave us a prescription for Periactin, an anti-histamine that works against nausea and vomiting, and we should be able to pick that up sometime today.

Apart from that, the doctor said we should watch out for symptoms of cholangitis. Since Liliana’s had her common bile duct removed due to the choledochal cyst, the liver is attached directly to the duodenum. Bacteria can enter the liver from the intestines, causing a bacterial infection. Symptoms would include vomiting, fatigue, fever, jaundice, yellowing of the eyes, chills, and abdominal pain. I was a bit surprised that no one had told me about this before, as it seems to be a serious thing.

Liliana has been sleeping a lot, but it could be that her nighttime sleeping schedule has been thrown off or that her teething and/or growing is taking up a lot of her energy. She really hasn’t been her cheerful self much, but the few times I’ve taken her out this week she’d babble like she normally would, saying things that sound like, “What’s that?” She was really interested in the icky rain we had to go out in on Wednesday. And even though she’s been sleeping a lot, she hadn’t fallen asleep in the car once this week. Car rides usually make her sleepy.

I need to finish this up, so I’ll post some pictures and give a short Damien update!

Liliana’s hair is so crazy because she had a bath this morning. 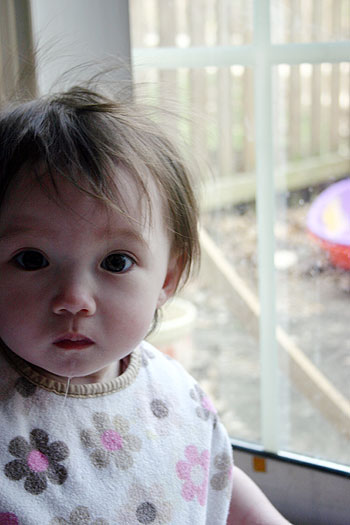 This has been her expression for the past few days. "Drooly" 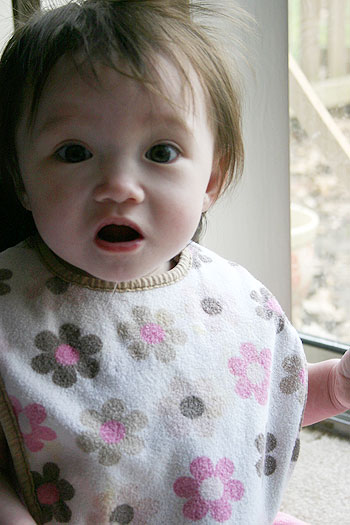 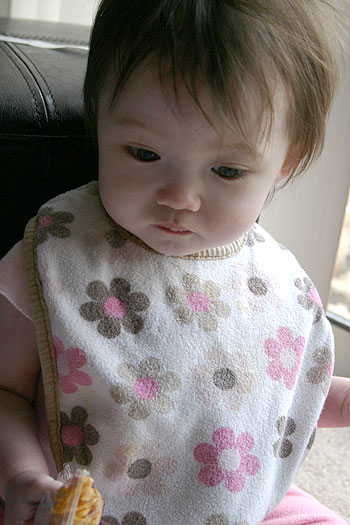 Yesterday I had my OB checkup and my cervix is now 4 cm dilated. I had a few contractions last night, so it could possibly be even more dilated! In any case, tomorrow marks 38 weeks into this pregnancy; Damien’s coming soon!